Taking it to the Streets

It is a Monday morning in late August, and Robert Cobb is waiting in line at the Downtown Cooperative Church Ministry’s Food Pantry on 8th Street in Augusta. The pantry opens at 11 a.m., but people start lining up before 9. He takes the city bus to make sure he gets there early – every Monday morning.

Some Monday evenings, he can be found next door at the St. Vincent DePaul/Coordinated Health Services 8th Street Clinic, where Medical College of Georgia students come to learn and faculty come to teach outside a classroom. It’s where he and around 450 other people get their medical care.

“I’d be nowhere without them,” he says. “They’ve treated me for all kinds of issues – infections, foot pain, regular checkups to make sure the tuberculosis I had as a child isn’t causing any new issues. Where would I go without them? The ER? That would just be a bill I couldn’t pay.”

Cobb is in ample company.

There is no average night at the clinic, but on one recent Monday, seven patients were waiting in the lobby by 6 p.m. The clinic usually opens at 6:30 p.m., and the students and supervising faculty stay until the last patient is seen. Two weeks earlier, they hadn’t shut the doors until 10 p.m.

The problems they see run the gamut from rashes to heart attacks.

“Some nights, we have a lot of follow-up visits; some nights, we just wait to see who walks in,” says second-year student Joseph Withrow, who has served as a clinic coordinator. “That’s kind of how it works.”

That’s “kind of how” it’s been working since the beginning.

BACKBONE OF THE CLINIC

Students are the backbone of the clinic – and the reason it started in the first place.

Through experiences and discussions with students at other medical schools, Rice had come up with an idea for a student-run free clinic that would serve the area’s homeless population. “We knew that there was a homeless population in the area that was larger than we could really get our hands around,” says Hobbs, now chairman of the Department of Family Medicine. “Many of them were undocumented, and many of them sought care in the local emergency departments. But when they got there, they were the sickest of the sick. There was no place for them to go when they were not acutely ill.”

The need was clear, but even so, Hobbs was hesitant. “I was concerned about the idea being bigger than [Rice and several of his classmates] could handle. If they engaged this community, they raised an expectation that I wasn’t convinced they could meet.”

Hobbs talked with his family medicine colleagues across the country. What became clear was that those who successfully ran homeless clinics had not only committed students, but a large infrastructure with significant departmental support. And that only raised more concerns.

The students also wanted to partner with the Salvation Army, which Hobbs saw as a good and bad thing.

“Students, by nature of their various commitments in medical school, ebb and flow,” he says. “And if we were going to partner with the Salvation Army, we’d have the clinic space, but the expectation that we would sustain this would certainly be raised. There would be plenty of patients in need of our services.”

But Rice was persistent.

Hobbs met with him several more times, once even receiving a long list of the names of students who’d committed to help. There was a promise of more.

Finally relenting, Hobbs told Rice, “I need a commitment from you that you will stay the course. You have got to find a way to continue this after you graduate. You will have to find a way to hand off to another group.”

And so it began. The first few clinics were small, with only a handful of patients. But over and over the students came. So did the patients, and so did Hobbs. He knew that if the clinic was to survive and thrive, he had to find a way to involve the family medicine faculty. Coverage of the clinic became part of the regular schedule for faculty and residents. It still is.

“It’s an important part of practice,” Hobbs says. “It provides some sense of academic citizenship – a way to give back through practice. But, let me be clear, the students are the ones who’ve made it work all these years. We developed the infrastructure and the department support after the students proved they were committed. They continue to show up.”

A MISSED PAYCHECK AWAY

Even today, they show up for new perspectives – something Hobbs says he experienced even in the early days of the clinic.

“I remember running into one of my former high school classmates who was sort of transitioning through homelessness by a stroke of bad luck,” Hobbs says. “It gave me a totally new perspective. We are all just a missed paycheck away. It could happen to any of us.”

Certainly Cobb didn’t think it would happen to him.

He had headed south to Augusta from North Carolina in 1971. The unemployment rate in the United States was at a record high, and he and his cousin were looking for work as painters. The gas to get them here was 40 cents a gallon, and they didn’t have much more than that.

Things didn’t exactly work out according to plan.

Shortly after arriving in Augusta, he met a woman, fell in love and had a daughter. Knowing he needed more than odd jobs to support his family, Cobb manufactured golf cars, then laid brick and tile. But neither job lasted long. 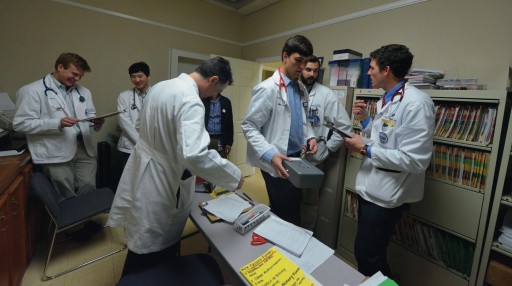 “And then I got into a little trouble,” Cobb says. That trouble landed him in jail. He was jobless upon his release but determined to “make life better.”

It hasn’t been as easy as he’d hoped.

For the last several decades, Cobb has picked up odd jobs here and there, but at 64 years old, he is finding that employment opportunities are fewer and farther between. He’s been lucky to find housing, where his rent is covered by maintaining the grounds, which he really enjoys. He rides the bus to city food pantries and, sometimes, to the soup kitchen. “I am surviving,” he says.

“We provide a service to people in need,” he says. “We also provide a teaching and learning environment for our students. And we help people understand the holes that exist in our society for some people.”

He cites as an example a homeless man with diabetes who showed up at the clinic with a large ulcer on his foot. “As they

were cleaning it, they found maggots in the sore. Here this man was, within eyesight of two major hospitals, and he had a problem you would find in a Third World country.”

Examples like that man and others help students see a bigger picture and understand just how resilient people can be, LeClair says. Students agree. 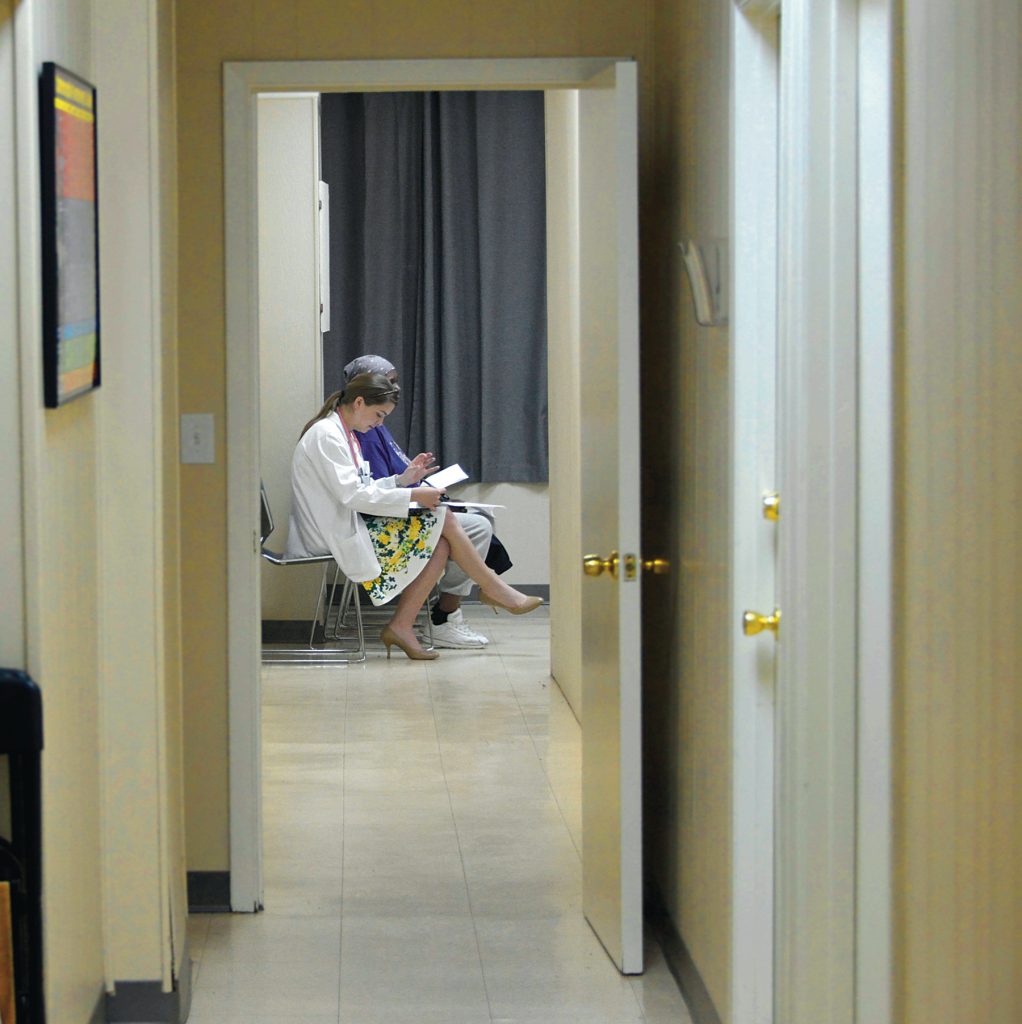 “Volunteering there is a great opportunity to help maintain perspective during a period when we’re spending a lot of time in lectures. It helps us remember why we’re going to medical school in the first place – to help people,” says third-year student John Shapiro, a former clinic coordinator.

Experiences there also gave new meaning to the lessons he was learning in those lectures.

For instance, a patient came in one night, having run out of the medication to treat her hypertension. She hadn’t been in for several months, Shapiro remembered. When the students measured her blood pressure, it was so high that they thought they’d measured it wrong. “We told her we needed to get her to the emergency room right away,” he says. “She could have had a stroke or heart attack at any moment. It really struck me that people are walking around with serious health issues, and those are exacerbated by their living situation.”

They likely saved that woman’s life that night. But there are those they can’t save. Those are the ones who stick with them, says third-year student and former clinic co-coordinator Anna Sulimirski.

Like the woman who came in so thin and frail that the students wondered, based on her medical history, if she had some type of gastrointestinal cancer. “How do you approach someone with little or no resources and tell them that?” Sulimirski muses. “I remember being at a loss. If it was cancer and there were symptoms we could see, she likely didn’t have a lot of time. A lot of the reason I got into medicine was because I feel drawn to help not just the sick, but the poor as well. I can’t imagine being sick with no resources, no way to get help.”

Being part of the solution is not easy, but it’s necessary, Hobbs concedes.

“I think working at the clinic is a way to get medical students to recognize their own vulnerabilities,” he says. “They may not [have] silver spoons, but they have had privilege. It’s important to get them in the habit of giving back – to develop and mature their sense of philanthropy.”

Clinic volunteerism can also serve as an antidote to cynicism, he notes.

“They get the opportunity to have conversations with people and see them face to face,” Hobbs says. “They aren’t just there working on their physical diagnosis skills. They are there to talk to people and realize that once the appointment is over, those people won’t remember the stethoscope or the way you touched them. They will remember that you talked with them – some of them may have gone all day without talking to another human being. Part of the caring process is listening, realizing your impact on people and showing them you care.”

That’s the idea Sam Rice had from the beginning, as evidenced by the handbook he wrote when the clinic was founded. It reads in part: “This is a free clinic. Remember that invasion of a patient’s self-esteem, pride or privacy invalidates this benefit since these aspects are of greater value than money itself.”

The only truly free clinic in the area

• The Department of Family Medicine has supported the clinic since 1989