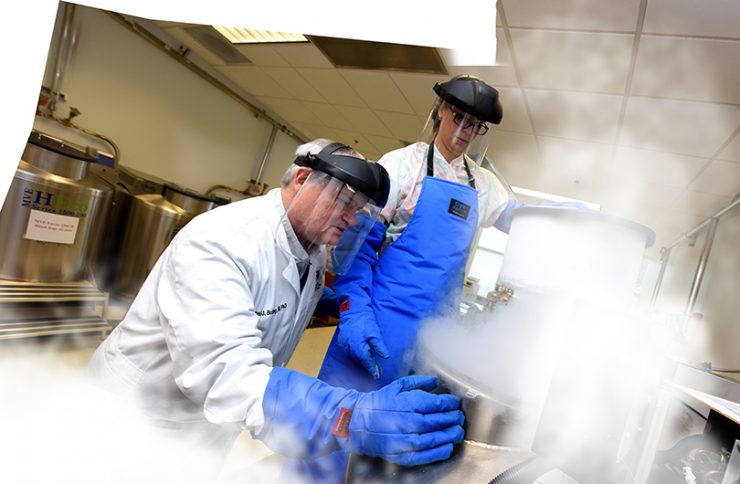 Banking for the Future

If you’ve ever heard a Northerner and a Southerner discuss winter weather, you know that cold can be a relative term. But when Dr. Roni Bollag, director of the Georgia Cancer Biorepository, uses the term, he means it. The freezers he oversees start cold and get colder: blood derivatives are stored at -80 degrees Celsius, and tissue samples are fast frozen in vapor-phase liquid nitrogen at -190 degrees Celsius.

Those are the temperatures required to store a variety of specimen types for future research, and the biorepository, known casually as the tumor bank, is home to hundreds of thousands of samples, all frozen, all ready for whatever researcher might need them.

“Storage in liquid nitrogen, as far as people know, can be indefinite,” Bollag says. “Obviously, there’s a tiny bit of degradation over time, but I would feel very comfortable taking a sample out that’s 15 years old and handing it out as if it came out of the patient yesterday.”

Established in 2005, the tumor bank is a labor-intensive investment in the future. Collecting and preserving so many samples is a very deliberate, hands-on process that generates a lot of paperwork. The lab, which has additional security precautions because of patient information, has the number of computers you’d expect, but also more than a few notebooks and binders. Having that many samples, all marked and recorded for easy retrieval, requires considerable bookkeeping. If you can’t find the samples you have — or don’t know what you’ve got — you might as well not have them at all.

The samples are procured through a highly coordinated process that starts with getting the patient’s consent at the time of surgery. Then, if there is any material left over that’s not needed for diagnosis, the pathology department will release it to the tumor bank, which will freeze it for later study. The exception: If they know of a researcher who could use the material for a current study, Bollag’s team will deliver the fresh samples to the lab so they can be processed in real time.

As the hub of the Biorepository Alliance of Georgia for Oncology (BRAG-Onc), it’s not just Georgia Cancer Center patients who are supplying this important resource, but patients from sites across the state as well.

“These hospitals are not necessarily academic centers where researchers are interested in the samples,” he says. “It’s basically a unidirectional flow. We preserve them, and then if someone around the state wants them, we’re happy to provide them.”

The biorepository is also part of a highly select network providing specimens to the National Cancer Institute, whose information is used by researchers around the world. In particular, BRAG-Onc provides specimens to The Cancer Genome Atlas, a program performing in-depth molecular analysis and sequencing of 4,000 cancer patients representing the 20 most common cancers.

The samples help take the valuable strides made by basic scientists and move them toward developing therapies for cancer.

According to Bollag, it’s gratifying work, particularly when he sees how invested others have become.

“The surgeons who provide the samples are very passionate,” he says. “They see the value. They’re not just taking care of the patient right then and there and hopefully curing the patient, but they might be helping the next patient down the road. They see that as part of their role in the academic environment.”

Texting for a Healthier Pregnancy