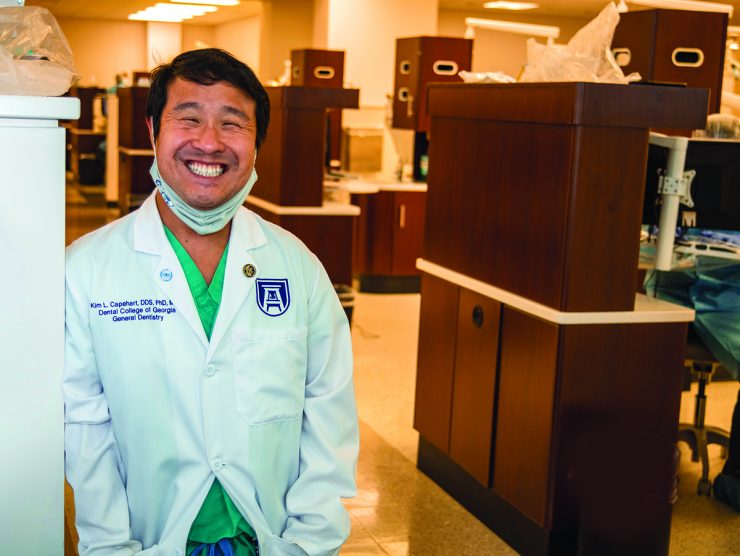 Kim Capehart had almost no earthly possessions — just a couple of changes of threadbare clothes and a set of worn wooden crutches — but he excitedly did as he was told.

He would finally have a home!

The little boy, whose parents abandoned him when he was born in South Korea with a debilitating condition called multiplexial congenital arthrogryposis, had grown up in an orphanage and was about to be adopted. But when the couple planning to adopt him learned of his condition — the in utero development of multiple joint contractures that likely wo

uld prevent him from ever walking — they abandoned the plan.

The little boy unpacked his things.

“The orphanage wasn’t bad,” Capehart says stoically. “Resources were meager, but my orphan mother was loving and supportive. I didn’t know any better.”

Still, he was desperate to follow the path of many of his fellow orphans and be welcomed into a real home. There were so many glimmers of hope. But every time he was told to pack his bags — an occasional occurrence throughout the first few years of his life — he would have to unpack them shortly thereafter, the seemingly inevitable result of a prospective family learning of his disability.

But one day, he packed for good.

He was 8 years old when a couple from West Virginia looked past his disabilities and focused on what they saw that mattered: a loving, bright and inquisitive little boy. They saw their son.

They flew him to his new home — he joined an older brother and sister, both of whom were also adopted — and began the slow and often awkward process of folding him into the family.

“I didn’t speak English and they didn’t speak Korean,” Capehart says, “so it took a while for things to gel.” He recalls expressing a need in his native tongue and his parents taking him from room to room trying to discern what he wanted. They’d start in the bathroom, pointing to the toilet: Did he need to use the potty? No? Then, on to the kitchen. Was he hungry? Thirsty? No? On to the next room, until they identified the way to meet their son’s need.

Capehart’s memory of this ritual is one of affection and good humor. He isn’t sure if his sunny mindset and extraordinary resilience are inborn traits or were acquired through sheer necessity, but they served him well. The little boy who couldn’t walk, speak English or relate to his new environment in any meaningful way whatsoever was about to thrive.

After many major and minor surgeries, he began extensive therapy for his medical condition — years of braces and physical therapy — and soon found himself standing on his own two feet. “If I hadn’t had that intervention, I would never have been able to walk,” he says.

His parents also enlisted a speech therapist to hasten his mastery of the English language. “There was a huge learning curve, and I still have a hard time with figures of speech,” he says, adding with a laugh that his wife calls him “the most literal person she’s ever met.”

A particularly memorable moment in his quest to learn English came when he was about 10. “I had always called my parents Omma and Appa, the [phonetic] Korean words for parents,” he says. “They’ve never forgotten the day I called them Mom and Dad for the first time.”

Other milestones quickly followed. Capehart was a natural in math but struggled initially in the language arts. But once he was fluent in English, he began acing all his classes. He also exhibited extraordinary musical talent, practicing classical piano for hours a day. He still struggled with his medical condition — pain and physical limitations are constants in his life — “but my parents always told me to focus on what I do have, not what I don’t have. I attribute all my success to them.”

And what a success story he’s had.

Capehart set his sights on the career that epitomizes the merger of science and art and earned a dental degree from West Virginia University. He hung his shingle in Greenville, South Carolina, then earned both a master’s degree and doctorate in business to optimize the entrepreneurial expertise needed to run a private practice. Once he had those skills in hand, he was eager to share them with others, so he began a consulting business. And, well, if he was going to practice both dentistry and consulting, he needed an efficient way to do it — so he acquired a pilot’s license to easily access his clients, most of whom were in Pittsburgh and Chicago.

“I’m actually afraid of heights, so I thought learning to fly would both help me overcome my fear and make it easy to get back and forth to my clients,” he says.

Oh, and a musician.

Capehart never lost his love of music, so he found multiple creative ways to incorporate that into his life as well. He has always loved composing, so he began writing personalized songs for special occasions such as weddings. “I minored in piano and composition in college,” he says. “I knew I was never going to be a professional concert pianist, but I still love to compose. When I write songs for special occasions, I’m not pigeon-holed in a certain genre. I get my creative juices out that way.”

He also began writing jingles for commercials. “I write the background music you hear on car and furniture commercials — the stuff nobody pays any attention to,” he says modestly with a laugh.

But plenty of people were paying attention, and his reputation grew so quickly that he acquired an agent to help handle the demand.

He loved his fast-paced and multi-faceted lifestyle, but after 17 years of private practice, he sensed the need to transition to a career requiring less time on his feet. Capehart was thrilled when the Dental College of Georgia offered him a position as assistant professor in the Department of General Dentistry. He signed on in 2018. “It’s a good fit and a great place to raise a family,” he says, referencing his wife, Katherine (“Rine”), and their children, Izzie, 15, and Atticus, 7 (pictured, right). “What I love most is the people, the sense of community and the hospitality.”

And make no mistake that his days are still action-packed. “I can’t toss my kids around, but I can still love on them,” he says.

“Our kids have no sense of his limitations,” Rine says. “Being around him, you just forget. And he never complains. Shortly after we married, Kim and I were volunteering in Guatemala, and we’d make these long walks without my having any awareness when it started to get difficult for him. I have to remind myself. He’s always concerned about others’ well-being rather than his own.”

Capehart also has energy to spare when sharing his gifts with his children and helping them cultivate their own. For instance, he gives both of them art and piano lessons.

“There’s a saying that you can’t teach your own kids, so rather than sit down with our children for an hour-long lesson, Kim will look for teachable moments,” says Rine. “He gives them snippets. For instance, our daughter is very interested in photography right now, so Kim will give her tips on how to create the best lighting. He sees a moment and seizes it.”

He also teaches by example. For example, Capehart recently made yet one more in-your-face denouncement of his fear of heights by skydiving. The professional he dove with said, “We’ll jump on three,” but skipped the last two numbers. “You said three, not one!” Capehart said with an exhilarated grin as they plummeted to the earth at 120 miles per hours from 14,000 feet.

Capehart is heartened he has made so many dreams come true — and endlessly grateful that his parents, Dr. William and Sandra Capehart, set them in motion. His wife and children, he stresses, offer endless inspiration to pack each day with as much fun and fulfillment as possible.

“I could not have grown my practice, my consulting business and the transition to the DCG without my amazingly talented and beautiful wife, Rine,” Capehart says.

Rine notes that he returns the favor in spades. “He is so kind and thoughtful,” she says. “For instance, I recently started a part-time job with the Augusta Symphony, and Kim surprised me one day by having pizza delivered for my team.”

Their children follow their parents’ lead of treating everyone with respect and taking differences or limitations in stride. They’ve also inherited their knack for not taking themselves too seriously. “Kim is such a quick wit,” Rine says. “He keeps us in stitches constantly.”

Capehart is grateful he has so much to laugh about, noting, “I love where I am at this point in my life. I’m very appreciative of my family, friends, DCG and my colleagues. Life is good.”