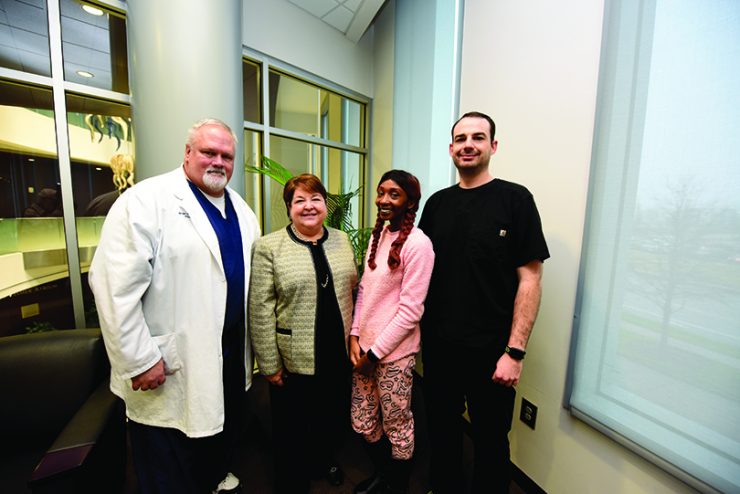 Quendella Huggins is only 28, but she’s already conquered more challenges than most people face in a lifetime.

Huggins, who lives in Columbus, Georgia, was 14 when she was diagnosed with nasopharyngeal cancer, a disease she overcame — but with severe post-treatment side effects. The treatment damaged her teeth, jaw and salivary glands, leading to extensive oral damage.

Dentist after dentist explained there was little they could do; her compromised blood supply and bone loss would complicate virtually any procedure they attempted.

Huggins, a social media influencer who inspires her thousands of followers to live their best lives, is unbelievably optimistic. But even she was finding it hard to accept the esthetic and functional challenges of her condition.

“I had done everything to try to get my teeth fixed,” Huggins says, explaining her despair at encountering one dead end after another.

When she finally confided in her followers, even removing her ill-fitting mail-order dentures so the world could see the full extent of her damaged smile, her life changed.

She was contacted by producers of “Chasing the Cure,” a TNT television series matching patients with health care providers to tackle even the most difficult problems. Huggins was featured on the show, with the restorative dental practice Goldstein, Garber & Salama in Atlanta offering comprehensive free treatment.

Dr. Marco Tadros, a prosthodontist and DCG graduate at the Goldstein practice, began Huggins’ treatment by reducing the crowns of her salvageable teeth to make room for a prosthesis. Next came a series of hyperbaric oxygen dives, prescribed by her oral surgeon, to minimize the risk of complications of the tooth extractions that would follow.

Huggins completed those stages of treatment, then embarked on the next leg of her journey. DCG Dean Carol A. Lefebvre had volunteered the college’s extensive resources to salvage as many of Huggins’ teeth as possible before returning to Goldstein, Garber & Salama for a more permanent fix.

In January, Huggins made two trips to the DCG, where Dr. Christian Dahl (‘16), an endodontics resident, completed 12 root canal treatments.

“The bone is compromised with less potential to heal following extraction, which is why we tried to save as many teeth as we could,” says Dr. Brian Bergeron, professor and program director of the Advanced Education Program in Endodontics. “She also had a lot of extensive carious lesions, a predictable side effect of her impaired salivary glands. We laid the solid foundation for the Goldstein group to subsequently produce the best possible esthetic and functional result. When all of her treatment is completed, she will have a beautiful and functional dentition, which will affect not just her looks, but her health and self-confidence.”

Says Lefebvre, “We provided a significant amount of gratis treatment and were so happy to do it. Quendella is an incredibly kind and caring person, one who has already endured more than her share of misfortune, and she deserves a smile that reflects her beautiful and resilient spirit.”

Huggins, for her part, is eternally thankful. “I can’t tell you how grateful I am to everyone who helped me,” she says. “The DCG team is so nice; the dental assistant and I became really close. We took group photos after my last treatment. I’m definitely excited. I know the end result is going to be amazing.”