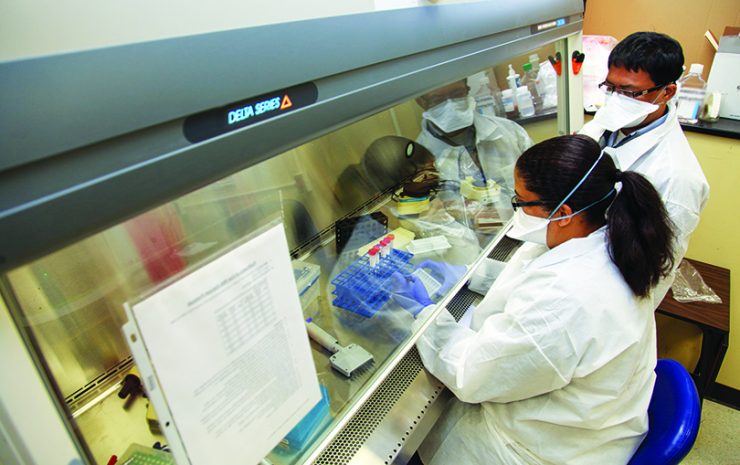 By late March, when it was clear that the novel coronavirus would be a major concern to Georgians, the Georgia Esoteric and Molecular Laboratory at the Medical College of Georgia began working around the clock to develop a novel test that could yield results within about two hours.

The GEM Lab, which specializes in high complexity testing, did not want to wait for the limited tests available nationally to arrive or for local samples to be shipped off, so literally assembled the pieces to make the first local PCR-based testing happen.

“More rapid identification of individuals who are infected will help ensure they get help as needed and that the risk of exposure to others is significantly reduced,” Dr. Ravindra Kolhe, director of the GEM Lab and vice chair for translational research in the MCG Department of Pathology, said of the test developed by the GEM Lab team (see inside front cover) over a handful of days.

“This was a nonstop 90-hour effort by the phenomenal team in the GEM lab to develop this test, but we all felt a commitment to our community to make this test available here,” Kolhe said.

But that was just the beginning. By early April, the GEM lab was offering a new PCR test with expanded capacity to serve the entire state.

By late September, the team was offering testing using a saliva sample, a clearly more comfortable option for test takers, after doing months of side-by-side comparisons over the summer that showed the results were on par with nasopharyngeal samples.

Their test runs on a high-throughput Perkin Elmer laboratory platform and focuses on two unique genetic markers, ORF1ab and N genes, for the virulent virus. Genetic markers are DNA sequences that are distinctive points of variation that can be used to identify a human or a disease, and in this case the novel coronavirus.

The support of Georgia Gov. Brian Kemp, the University System of Georgia and Chancellor Steve Wrigley, as well as colleagues at MCG and the Georgia Institute of Technology, who loaned much in-demand, real-time PCR instruments essential for viral testing to the GEM Lab, enabled the team to escalate from running 72 tests in a 24-hour cycle to 500 tests daily to 1,000 tests in rapid succession, Kolhe said in early April.

The GEM Lab is CLIA-certified, a Centers for Medicare and Medicaid Services certification, and certified by the state of Georgia for high complexity molecular diagnostic testing.

From the President Fall 20/Winter 21