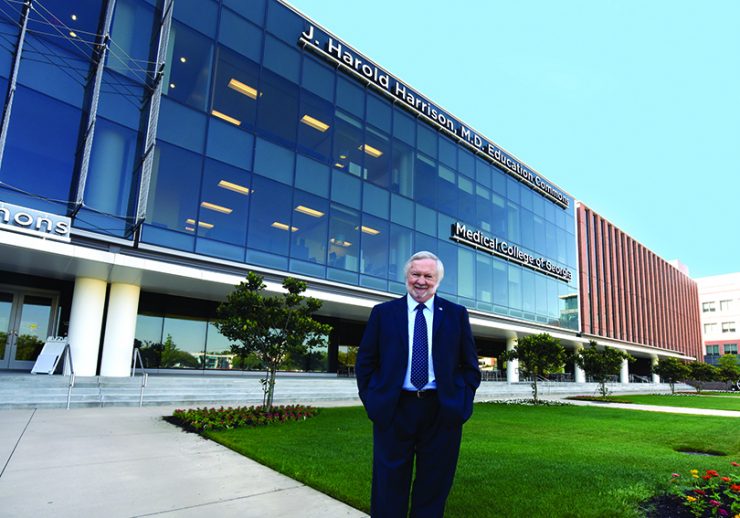 From the President Fall 20/Winter 21

Though 2020 has brought us challenges unlike any we’ve ever experienced, I’m proud to say the Medical College of Georgia is emerging from this difficult year with a strong sense of momentum built solidly on growth.

Just as enrollment for the university at large continues to grow even during the pandemic, MCG has embraced our responsibility to address the state’s physician shortage by increasing the class size from 240 students per class — already one of the largest class sizes in the nation — to 260, with plans to grow to 300 students per class over the next five years.

I’m sure I don’t have to tell you how important this is for the state’s overall health. With Georgia remaining one of the fastest growing states in the country — the Georgia Department of Economic Development forecasts a 17.7% increase by 2030 — the state ranks near the bottom in the number of physicians per capita. Currently, nine of the 159 counties in Georgia have no physician, 18 have no family medicine physician, 32 have no internist, 60 have no pediatrician and over 70 have no general surgeon or OB/GYN.

Creating more physicians is only part of the equation, however. Keeping them in Georgia, particularly the underserved areas of the state, is also part of our charge, which is why we kicked off our innovative 3+ curriculum with the MCG Class of 2024, which started in August. The 3+ Primary Care Pathway is taking on the state’s physician shortage by incentivizing remaining in the state’s rural areas. In exchange for a service commitment to an underserved area of the state and dependent on future funding, these students, some of whom will graduate in three years and enter directly into a Georgia primary care residency program, will receive a scholarship to cover their tuition — a bold answer to a widespread problem that is not going away on its own.

But as vital as that is, it’s important to remember that our impact isn’t measured solely on the number of physicians we produce. Our place in the community is larger than that.

Though it’s often not as appreciated as it should be, the work our researchers do every day has a major impact on the health and well-being of our state and beyond. And even during the pandemic, which required research operations to be scaled back, our researchers have moved forward in impressive and important ways.

MCG’s NIH grants have reached in excess of $65 million, which is more than a 20% increase over last year’s $52.7 million.

That growth is coming from many areas, but particularly exciting is what’s happening in the Department of Medicine, which has experienced a 30% growth in faculty and a 33% growth in federal funding.

The timing of this increase in NIH funding further underscores our commitment to providing leadership, innovation and expertise, even when times are tough.

Another good example is the work done during the pandemic by the Georgia Esoteric and Molecular (GEM) Lab led by Dr. Ravindra Kolhe. The testing developments that have come from the GEM Lab have been implemented on a large scale, starting in March when we received emergency authorization approval from the U.S. Food and Drug Administration for the COVID-19 test we developed in-house. Georgia Gov. Brian Kemp then turned to us to take our testing process statewide in conjunction with the Department of Public Health and the National Guard.

In September, the GEM Lab-developed saliva test was introduced, demonstrating our ability to rapidly adapt to the changing circumstances.

That kind of attention has a powerful reputational value with the general public and helps build awareness of our other important contributions. And because our commitment to excellence never wavered, even in the midst of the overwhelming challenges produced by the pandemic, more people than ever know about the valuable role we play as the state’s only public medical college.