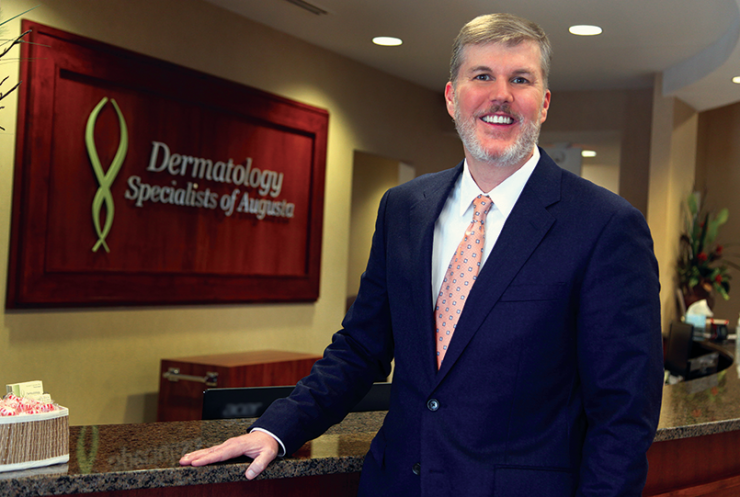 Transformative gift helps reestablish dermatology as a department at MCG

It was  just before Christmas 2018, and Dr. David Hess, dean of the Medical College of Georgia, was about to give the three people sitting in front of him an unexpected gift. Kyle Scott, then an MCG major gifts officer; Dr. Loretta Davis, then-chief of the Division of Dermatology in the MCG Department of Medicine; and Dr. Sanders Callaway, ‘99, an Evans, Georgia dermatologist and former MCG resident (2003), had just presented Hess with a proposal to establish the first endowed chair in dermatology’s 50-year history, thanks to a gift by Callaway and a match by the MCG Foundation. As part of that proposal, the three asked if consideration might be given for dermatology to become a department again “in a few years,” recalls Davis.

Davis remembers Hess thinking. Then he leaned forward and said, “Let’s just do it now.”

The MCG Division of Dermatology — a title it held for 25 years — became a department again on Feb. 1, 2019, with Davis established as chair. “The timing,” she says, “was just perfect.”

Past present
MCG’s Department of Dermatology and its residency training program were founded in 1967 under founding chair Dr. J. Graham “Skee” Smith. Smith was also the founding editor of the Journal of the American Academy of Dermatology, the profession’s leading peer-reviewed journal — fondly known as the “Blue Journal” — and his name is still on its masthead. “Older dermatologists say they remember sending their manuscripts to Augusta, Georgia,” says Davis. “We were on the map, and I think we fell off the map a little bit when we became a division.”

That restructuring, which moved dermatology to a division under the Department of Medicine, coincided with the department’s 25th anniversary. At that time, Davis had been a faculty member for two years under chair Dr. Donald Abele, who cofounded the department with Smith. “We already were a small department of four faculty members,” she says. “It hurt in that we lost the ability to attract new faculty and to grow. Most programs around the country were departments; there were very few strong divisions.”

Alumni who had graduated as residents of the Department of Dermatology were indignant, then rallied around their program. “We couldn’t have asked for more supportive alums,” says Davis. “It was just an outpouring of emotional, educational and financial support. We could not do what we do without alumni. They really have come to bat so that our current residents can have the same opportunities they had when they were here. Our alumni are the backbone of what we’re able to do, and Dr. Callaway’s gift is an amazing example of giving back.”

While it may not have been spoken outright, that desire to become a department again was always an undercurrent. The need for an endowed chair, says Davis, became increasingly important as the undercurrent became a tide in more recent years. “The two are very much intertwined,” she says. “A noble goal and a tide of support have the potential to do big things.”

Callaway was one of those supportive alums. Although he was a resident when dermatology was a division, he says he knew about the history. During his time at MCG, Dr. Jack Lesher was division chief, and together with Davis, Callaway recalls, “He was this father figure, while Dr. Davis was the mother figure…she nurtured us and really invested in the holistic part of training.”

“If not me, then who?”
Callaway has always been single-minded. Even as a child, he says he always knew he wanted to be a doctor. A teenage bout with acne set it in his head that he wanted to become a dermatologist. And, “MCG was where I wanted to be,” says the Statesboro-born Callaway, who counts Dr. Tom Crews, a former MCG otolaryngology resident, and transplant surgeon Dr. James Wynn, who graduated from MCG in 1980, as former neighbors in his hometown. “And I could not have asked for a better education.”

His experience as a resident solidified his love for MCG and for Augusta, which is where Callaway has settled down with his wife Dana and children Patty and Wesley following a stint in Atlanta. “If you think about it, I’ve got eight years of training here — internship, residency, medical school. I love this department, and I love everything it’s given me,” said Callaway, who has given annually since he graduated.

“For any of us alums, if you look back on your daily life and career, that’s all because of MCG dermatology. None of us would be where we are today without that program, so all of us should support it as much as we can.”

Which is why, shortly after the division’s 50th anniversary in 2017, when Scott sat down with Callaway and the conversation turned to the need for an endowed chair — with the goal of giving dermatology back its autonomy as a department — Callaway thought, “If not me, then who, and if not now, then when?”

He says, “The program really needed a spark to get things going again. Kyle explained that the establishment of an endowed chair would certainly make for a good argument to regain departmental status. I had no idea that things would happen this soon and be so transformative. We may call it transformative, but to me, it’s a relatively small gift to give back for all the department’s given me.”

A department once again
One thing that’s different, says Davis with a wry laugh: “I have a lot more meetings now.”

But meetings can lead to some big results. Over the past year, the newly minted Department of Dermatology has hired two fellowship-trained surgeons to perform Mohs micrographic surgery on skin cancers, including a former resident; signed another resident graduate to remain as a faculty member; hired a specialist in dermoscopy, or skin surface microscopy, for a new pigmented lesion-melanoma clinic; and acquired a practice in Aiken.

“Essentially, we’ve doubled the size of the department,” she says.

There are many other goals, and they’re just getting started. On the list are increasing pediatric dermatology services and adding more subspecialty clinics, such as a contact dermatitis clinic to evaluate allergic skin reactions. “Probably the biggest goals are to increase our patient care volume, develop specialty clinics and increase research,” says Davis. The department is in the midst of several novel projects, including offering teledermatology for early diagnosis of skin cancer to those in rural and underserved areas with a grant recently awarded to the Georgia Cancer Center from the United States Department of Agriculture.

Ultimately, the goal is to be recognized as a referral center for tough dermatology problems, what Davis describes as those difficult, challenging cases.

“We are definitely in a position to help diagnose and manage these patients. We want to be seen as the place to go in this part of the state if you have difficult skin issues,” she says. “That place where physicians send challenging patients for a second opinion, further guidance or management. We’re already working with colleagues in rheumatology and plastic surgery, and we want to nurture that collaboration. We’re working on translational research projects and want to make those types of projects and ideas grow.

“We also will continue to mentor our medical students; right now, we have nine third-year students interested in dermatology…We also have nine residents, and depending on the Accreditation Council for Graduate Medical Education, we would like to eventually increase that number of residency positions. We want to continue to grow.”

The ripple effect
Soon after MCG’s Department of Dermatology status became official, Davis’ son — a resident in Dartmouth’s Division of Dermatology within the Department of Surgery — mentioned to her that his division was going through the same experience. “I wrote their institution a letter of support emphasizing what it meant to me to have dermatology be a department again,” she says. “The Dartmouth division chief told me my letter was right on top of their proposal packet.” Dermatology at Dartmouth would also gain department status.

“It ripples,” she says. “I think as other divisions around the country have become departments, a precedent is set. New departments are exploding with growth.”