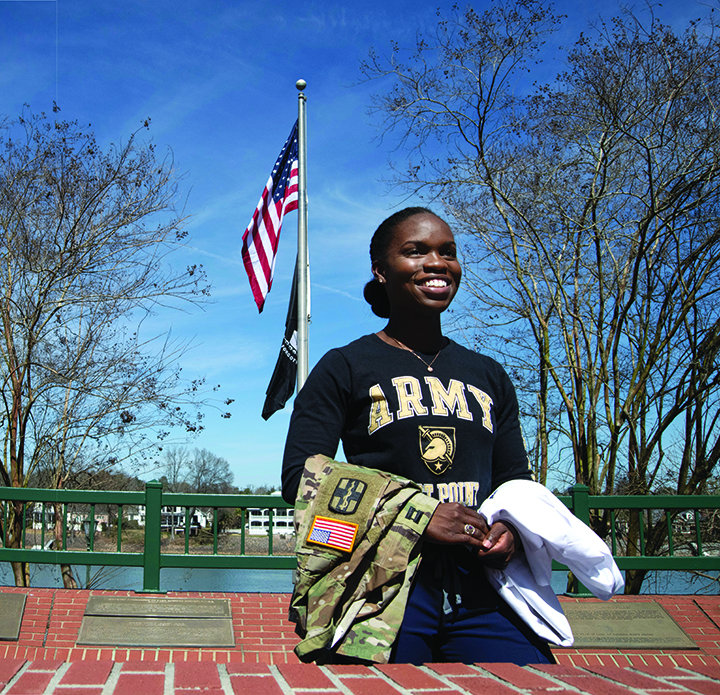 The chicken or egg question comes to mind when meeting Olivia Fraser: Does she credit the military with her extraordinary self-discipline and tenacity, or were those innate qualities that attracted her to the military in the first place?

“Both,” Olivia says cheerfully, noting that although her work ethic is inborn, her career in the U.S. Army (nine years and counting) has taken it to a new level, jumpstarting virtually every dream she’s ever had.

“The Army definitely taught me how to manage and prioritize my time,” says Olivia, a third-year DCG student. “It helped me prepare for the many challenges of dental school.”

Both of Olivia’s parents enjoyed illustrious Army careers “and I’ve always looked up to them,” she says. “Plus, I’m a first-generation American — my parents are from the West Indies — and I am grateful for what the military made possible for my family. I wanted to be part of an organization that has the potential to change so many lives for the better.”

Olivia graduated from the U.S. Military Academy at West Point in 2012 and completed tours in Afghanistan and Iraq, during which she decided to pursue dentistry. “I was assigned to a surgical team in Afghanistan, and two patients with oral trauma made a particularly big impression on me,” she says. “One was a special-forces soldier and one was a small child. I saw how my team and the dentist interacted with them before, during and after surgery, making the child smile even though he’d lost several teeth. I realized what a significant difference dentists can make in people’s lives.”

She obtained a Health Professions Scholarship from the Army and moved to Augusta to pursue her dream. She will resume active duty upon graduation, treating her fellow soldiers. Olivia notes that the skills she has already cultivated in the military have served her very well. While completing her dental degree, she is simultaneously earning an MBA in the Augusta University James M. Hull College of Business. She also tutors and serves on the AU Student Advisory Council.

Despite the rigorous schedule, Olivia has no complaints. “Dental school has exceeded my expectations,” she says. “The school has a great sense of community, and I love the diversity. I am an older, non-conventional student, but all of my classmates’ backgrounds are remarkable and unique in some way. I am thankful to share this journey with them.”

As much as she values the experience, she is eager to return to the Army full time after graduation. “I love having the opportunity to serve in two professions with missions that are far greater than myself,” she says. “I’ve met amazing people, been to amazing places and had amazing experiences over the years. Joining the Army was the best decision of my life, and I wouldn’t trade it for the world.”

On the Horizon: Grant Advances Research