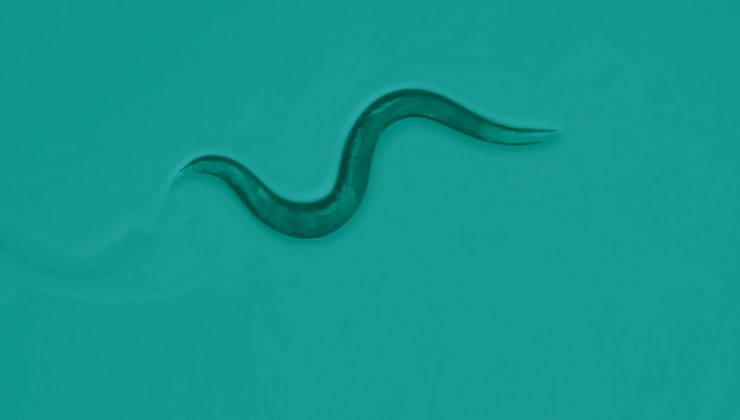 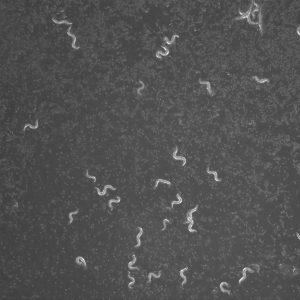 “I am trying to figure out how those neurons are dying,” Mor, neuroscientist, says of key brain neurons destroyed in Parkinson’s disease.

In her new lab in the Medical College of Georgia Department of Neuroscience and Regenerative Medicine, she has an RNA interference library with bacterial clones representing most of the genes of the C. elegans, a nematode, with a gene number similar to humans, many of which have functional counterparts to humans. These worms, which measure about 1 millimeter, or .039 inches, live about two to four weeks and stay transparent throughout life, also have a lot of nerve cells, or neurons — about one-third of their total cell count — and have long been considered excellent models for brain and aging research.

In the search to better understand what goes wrong in Parkinson’s, the worms enable Mor to test specifics, like a bit of a bacterium, and look at its impact, and use the real magic of high throughput screening to efficiently identify the most logical culprits in the devastation of Parkinson’s.

One clear problem in this neurodegenerative disease is with that little understood protein α-synuclein, which is primarily found in neurons and thought to have a role in synaptic vesicles, which are essentially biological carrying cases that deliver important messages so we can do things like raise our hand.

The educator in Mor makes her head straight to the whiteboard in her office where she shares how neurons share information. Like outstretched arms, neurons have dendrites that take in information from the thin, long axon of another neuron. While their extensions don’t technically touch, their essential exchange occurs through points called synapses and vesicles that, in this case, deliver the neurotransmitter dopamine. C. elegans have a similar setup.

The protein α-synuclein is all around these vesicles, but while exactly what they are doing is unclear, it likely has a role in the organization and recycling of these synaptic vesicles, Mor says. To add to the puzzle of just what this protein is up to, mice seem generally normal when it’s knocked out.

But in the estimated 10 million people in the world, living with Parkinson’s, the harm it can do is clear.

Proteins are the workhorse of cells and they must be properly folded, or configured, to do their heavy lifting throughout the body. In this case, α-synuclein becomes misfolded in a small percentage of people because of genetics and in others likely from some sort of environmental triggers or other unknowns.

Whatever the cause, what is essentially the sticky innards of the amino acids that comprise the protein, become exposed, so the proteins start sticking together, starting with just a few then potentially building like a rolling snowball. But any size is potentially deadly to neurons. And the smaller ones likely are the most adept at traveling.

Much like the infamous amyloid plaque that grows in Alzheimer’s and other neurodegenerative diseases, misfolded α-synuclein forms plaques in this case inside our neurons called Lewy bodies, which also are known to impact cognition and other basic brain functions.

Why microglial cells, immune cells resident in the brain, don’t just eliminate the unnatural, growing protein wads early on is probably because, like most body functions, the quality control function of cleanup diminishes as our age increases, Mor says.

So Mor, who just completed her postdoctoral fellowship at Princeton University before joining the MCG faculty in October, is enthusiastically committed to helping find a way to prevent or at least stop the snowball and spread in her professional lifetime.

There is much work to do. “The short answer is, we still don’t know,” but simply put, neuron death seems to result from the protein aggregates gumming up its inner workings, like sticky art resin might threaten the life of a beautiful piece of art.

How/why the initial stickiness starts, remains another million dollar question. Seemingly ironically, Mor and others — Mor showed it for the first time in a mouse brain — have seen that the simple interaction of dopamine, which is packaged in the synaptic vesicles, and α-synuclein, which hovers around those vesicles, can prompt the unhealthy aggregation that ultimately kills off the neurons producing dopamine.

Particularly problematic is that the stickiness appears contagious, spreading to α-synuclein in other neurons, although how remains another million dollar question, says Mor. It may be that a neuron literally spits out an aggregate before it gets too big. Then that sticky wad may travel quite a distance.

In fact, some of the latest evidence indicates that the trouble may actually start in the gut.

Mor theorizes, and there is some evidence in patients to support her ideas, that we are either consuming some already sticky form of α-synuclein and/or something like a bacterium in our gut is making the protein in the neurons in our gut sticky. However it starts, these agile sticky wads may be traveling up the natural communication paths from the digestive tract to the brain, which is known to have two-way conversations with the gut.

Which takes her back to the C. elegans. Mor is developing a model that recreates that sequence of events in the worm, then she can use the proven, incredible flexibility of the worm model to do high throughput screening of thousands of potential modifiers and genetic interactors looking for early instigators of the destructive, traveling protein aggregations.

She hopes by working both to see what might stop the stickiness and what makes it worse, she can better understand the problem and potential solutions for people.

The fact that she can do such large scale analysis means this high-energy individual can multiply her impact and better focus her future effort.

“With the worm, what you can do is test for thousands of chemicals or drugs or genetic manipulations to see what is important or what has an effect on what you want to study.”

Something must initiate the problematic misfolding, she says. Some theorize a “leaky gut” is enabling bacteria and inflammatory molecules to seep into surrounding tissue, triggering inflammation and ultimately that unhealthy protein aggregation. She hopes it is something we are eating, drinking or maybe one or more bacteria in our microbiome so it’s something we can change and so reduce the likelihood of developing Parkinson’s. “These are horrible problems that people have to endure. Hopefully we will get to the point where they don’t have to endure it.”

Mor is a New Yorker by birth, who captures the energy and enthusiasm of America’s largest city. She was smitten with the brain early, intrigued by concepts like how the clearly physical brain enables such intangibles as emotions.

“To me the brain is unmatched,” is an early truth she holds to this day. When she asked parents Eva and Gabi Mor about how the brain worked, they rightly told her nobody 100% knows and she could go do the research to find her answers. Mom, Dr. Eva Mor, is an epidemiologist and published author of works like “Making the Golden Years Golden,” who ultimately focused her career on helping older individuals live better. Her life’s work likely fueled Mor’s in the difficult diseases of aging like Parkinson’s. “She kind of instilled in me a fascination and desire to protect.” Her mom’s dad, Leib Rozen, also lived for 14 years with Parkinson’s. He died before his granddaughter made her career decisions, but no doubt he was with her when she did.