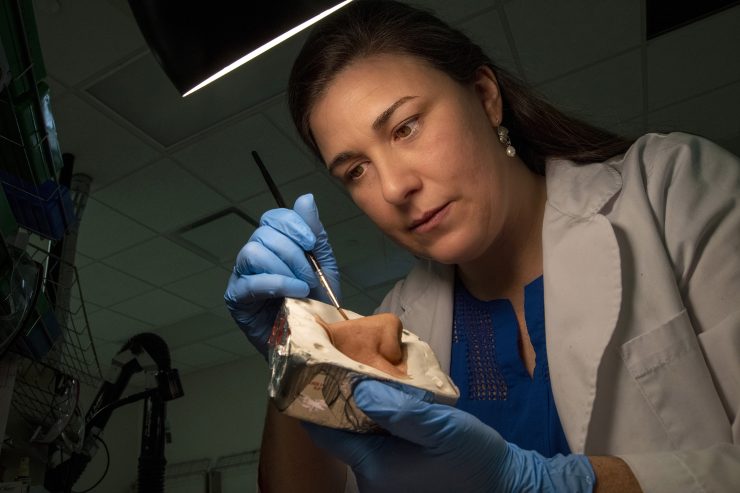 Amanda Behr still smiles thinking of a little boy who liked to occasionally surprise his teacher by removing his ear in the middle of class.

“I made him a spare so he could use it for show-and-tell without having to take off his other one,” she says with a laugh.

The ear, a prosthesis, is one of thousands of body parts Behr has painstakingly and meticulously created to compensate for a loss due to an injury, disease or congenital malformation. As director of the Augusta University Anaplastology Clinic, located in the Dental College of Georgia, she can’t imagine a better fit for her dual loves of art and science. And as her anecdote of the little boy illustrates, she will go to virtually any lengths possible to make her patients happy and whole.

Behr, associate professor in the Department of Medical Illustration, works extensively with the Medical College of Georgia and the DCG to recreate non-weight-bearing body parts including eyeballs, noses, ears, breasts, lips and fingers. She also teaches medical illustration students and creates simulation models, enabling dental and medical students to practice a surgical procedure or clinical technique with as lifelike a simulation as possible.

But one of her most treasured roles is working directly with patients. “Anaplastology fulfills my need to help people in a very tangible way,” Behr says. “It’s one-on-one helping. Patients are so grateful for a positive outcome.”

Ironically, nothing pleases her more than when her artistry goes absolutely unnoticed. “Anaplastology is really the art of camouflage,” she says. “The best outcome is for patients to totally blend in. There’s a huge psychological impact on having a physical difference, particularly a facial difference, and it’s very fulfilling to help people feel like they can go out in public and not feel self-conscious.”

It was Behr’s mother, an MCG alumna (Dr. Sandra Reed Lichtenfeld, ’87), who first noted her daughter’s talent and helped guide her career path.

“My mom painted in her spare time, and I would pester her to let me join in,” Behr says. “She encouraged me, and when I was 14, I was chosen to visit Russia for 10 days for an art and cultural exchange program. I had an art exhibit in Saint Petersburg, but it was observing a different culture that made the biggest impression on me. It was enriching to see how others live; the experience was very foundational to how I now approach the world. I try to see things from all perspectives.”

Behr studied art after high school but quickly realized how much she missed science. Her mom was well-versed in the field of medical illustration thanks to her education at AU, which houses one of only four departments in this field nationwide. She suggested that her daughter give it a try.

“I transferred to the University of Georgia to study scientific illustration, then completed my graduate degree in medical illustration and research in anaplastology at the Johns Hopkins University School of Medicine,” Behr says.

Upon graduation, she took a role as the art director for a company that publishes medical textbooks, “but after five years, I realized I missed the patient connection,” she says. “I completed extra training at Johns Hopkins and in Rochester, Minnesota, to become certified in anaplastology.”

She joined AU in 2013 and has found herself in high demand ever since.

Behr meets with the patient in need of a prosthesis, assessing not only his or her anatomy, but factors including lifestyle, movement patterns and growth projections. Even the environment can affect her work; for instance, patients who live in the South require a more durable adhesive than those from less humid climates.

“Some of my patients drive hours to see me, so I try to be as efficient as possible right from the start,” she says.

After a thorough evaluation, Behr, assisted by three-dimensional computer scanning and printing for optimal precision, uses a dental stone mold to fashion the missing body part, typically using silicone. She sculpts the prosthesis, then delves into the most meticulous of details to ensure proper fit and color-matching. Once the prosthesis is nearly complete, she educates the patient any needed last-minute adjustments. The process typically takes about a month.

Most prostheses are removable; body parts such as ears and noses are taken off nightly and replaced with adhesive the next day, although oculars (eyeballs) can stay in up to a couple of weeks at a time. In some cases, surgeons can implant devices into the bone that connect to a prosthesis. Behr also works with prosthodontists to connect facial prostheses to obturators, devices that can be used inside the mouth to close gaps caused by conditions such as a cleft palate. Behr stresses that, in addition to the tremendous social and psychological benefits of these protheses, they are also highly functional.

She enjoys all her patients immensely but finds particular fulfillment in working with children.

“Little kids, particularly in cases of congenital malformations, tend to be totally comfortable with their differences until social teasing sets in,” says Behr. “But even then, they often have the best attitudes. I try to make the experience as fun and nonthreatening as possible. I get down on their level and keep them as involved as possible in the process.”

She is thrilled that society is increasingly embracing this specialty; for instance, most private insurers partially cover prostheses, and the cable television channel TLC has a new show about anaplastology called “Body Parts.”

As far as Behr is concerned, the more people know about her specialty, the better. “I want to help as many people as I possibly can,” she says. “My best days are when I see happy tears.”