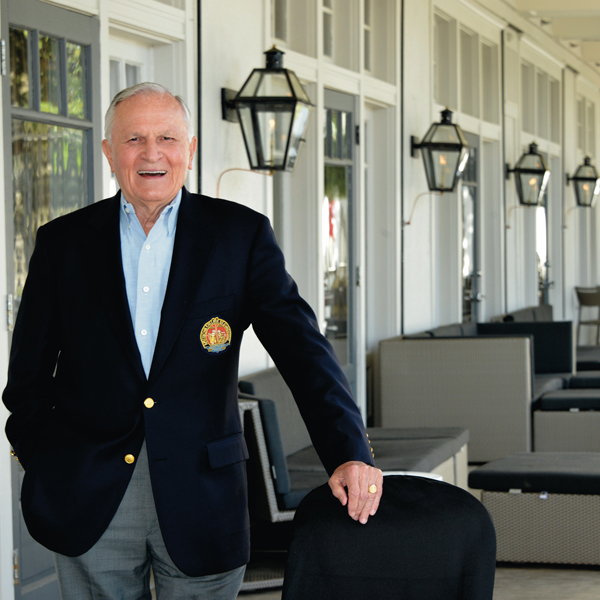 His father was driving him downtown in Waco, Texas. As they approached an intersection, his dad asked his son what he wanted to do when he grew up.

Not Just a Job

“Sitting at that intersection, I saw a Coca-Cola bottling plant on one corner and a library on another,” McGinnis recalls, noting that the imagery solidified his commitment to pursue a calling, not just a job.

“I said, ‘I want to be a scientist,’” McGinnis replied, “and my father said, ‘Well, your mother would really like you to be a doctor.’”

McGinnis needed no encouragement. As a young child, he had been quarantined for several weeks with diphtheria. “The front door of our little house had a big X over it,” he recalls. “No one was allowed in except the doctor. I became very impressed with him.”

McGinnis decided on medicine that day and never looked back.

The family moved from Waco to Athens, Georgia, when McGinnis was 12, and the doctor-in-the-making was on a fast track to fulfill his mother’s dream. Always studious, he breezed through high school early and enrolled at the University of Georgia at age 15, majoring in chemistry and zoology. “But I really liked history, too, so I was always very fascinated by those classes,” he says.

It was an early indication of McGinnis’ inclination to collect passions and pastimes along whatever route he was on while staying steadfastly on course. By age 19, he was a medical student. The year was 1950.

McGinnis notes that his innate extroversion served him well at this juncture. “Here I was, a fuzzy-cheeked kid, and I was in medical school with all these World War II veterans,” he says.

Rather than find himself intimidated, he made fast friends. “I had no pocket money to speak of, and they had money and cars,” he says with a laugh. Many of the friendships he cultivated while bumming rides have endured for decades.

Among his best friends were his fraternity brothers. “I wish MCG still had fraternities,” McGinnis says wistfully. “We had the best of times.” He remembers going to classes, then “heading up the hill to the Phi Ro Sigma house on Troupe Street. We’d play ping-pong for a while, then study from 7-11 p.m. uninterrupted every night. We were really focused.” He was elected permanent class president, a position he has taken seriously by keeping the class close through the years.

Dr. Charles R. Hatcher Jr. (’54), who roomed with McGinnis for three of those years, remembers those days fondly. “We grilled steaks on Saturday nights,” says Hatcher, president for health affairs emeritus and director of the Medical Center Emeritus for Emory University. “They cost a dollar or less at the time. We were really living it up.”

McGinnis, or “Mac,” as Hatcher calls him, is remembered as an extraordinarily considerate roommate. “He was very fastidious,” Hatcher says. “Everything was exactly right in his closet . . . all the trousers turned the same way, things like that. I couldn’t have asked for a better roommate.”

His orderly nature came in handy in other ways as well. “We played a lot of bridge,” Hatcher says. “We’d play for a tenth of a cent per point. At the end of each month, Mac would know exactly how much we owed each other. He was a very reliable bookkeeper.”

McGinnis relished his classes as well. “I remember Dr. Harry O’Rear (then chairman of the Department of Pediatrics and president of MCG from 1958-72) really captured my attention with his Socratic teaching methods. He challenged us to find answers for ourselves. He was a pediatrician, so I decided that’s what I would be.” 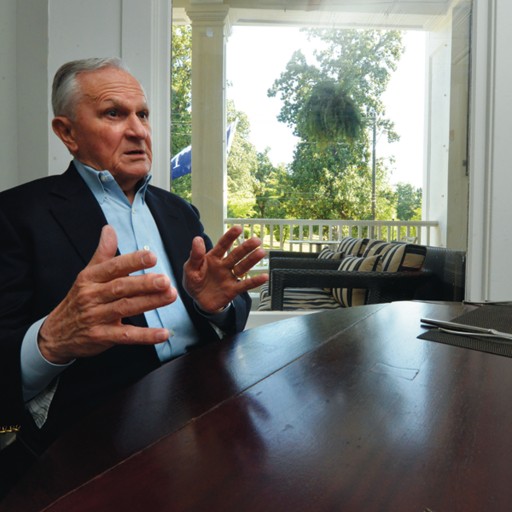 But a mixed internship in Montreal changed his mind. McGinnis remembers shadowing a surgeon – “he was so technically beautiful and an inspiring mentor” – and performing tasks such as measuring the clotting time of surgery patients’ blood every two hours overnight. “I was so fascinated by the fact that you could do something and have an immediate effect,” McGinnis recalls.

He moved back down south for a surgery residency at the University of Texas, then served in the U.S. Air Force for four years.

“I did something like 600 cases (of surgery) a year in the Air Force,” he says. “One of my colleagues noted that there had never been a death under my leadership; I was really proud of that.”

Next, it was time to hang his shingle. McGinnis, who by now was married to wife Julia, contemplated his options. “We really like Vermont, so we thought about moving there,” he says. “But there are more people in large cities than there are in the whole state of Vermont. I’m a people person; I needed to be where the people were.”

The couple moved to Atlanta, where McGinnis joined a surgery practice. As he had done in the Air Force, he performed a wide range of surgeries, but he increasingly gravitated toward surgical oncology. “Being a cancer surgeon is almost like being a family doctor,” he says. “You see your patients often over long periods of time and form very strong bonds.”

McGinnis, who retired in 2003, witnessed “a complete evolution in cancer treatment” during his career and is thrilled that the future is even brighter. “Initially,” he says, “the only treatment for cancer was surgery. There is a saying in surgery that a chance to cut is a chance to cure – true for early-stage disease. But now that we are really beginning to understand the molecular biology involved, well – it hasn’t come to be a miracle yet, but I hope it will be. This is such an exciting time for medical students.”

He is particularly enthused about the growing field of immunotherapy – manipulating the immune system to thwart abnormal cell division or nip it quickly in the bud. “Immunotherapy for a long time was the biggest disappointment in cancer treatment,” he says. “Interferon was the big new treatment, and it just didn’t go anywhere. But immunotherapy is finally coming into its own. I think within 10 years, everyone will have their genome mapped, then precision medicine will be all about prevention and personalized care.”

Part of the Culture

McGinnis has also served as president of the MCG Alumni Association and the MCG Foundation, relishing the opportunity to connect with students. Among his biggest sources of pride as an alumnus were commissioning an MCG retrospective (The History of the Medical College of Georgia by Phinizy Spalding, University of Georgia Press, 1987) and overseeing the restoration of MCG’s first home, the Old Medical College on Telfair Street. (His secret for squeezing so much into his schedule? “I don’t play golf.”)

Says Hatcher, “He was an ideal student, and he is an ideal alumnus. I could not have kinder words for anyone than I have for Mac.”

Brawley concurs. “LaMar is the consummate physician, surgeon and gentleman. He is known for his common sense and caring, and I am amazed at his energy and insight. I love this guy and want to grow up to be like him.”

McGinnis, a member of the Alpha Omega Alpha honor society, delivered the keynote AOA lecture to students during Alumni Weekend in April, emphasizing the importance of professionalism.

“I think professionalism is what differentiates physicians from the rest of society,” he says. “In our very important focus on science and technology, at times professionalism is assumed. But it has to become a part of the culture.”

The inner historian in him shares the cautionary tale that although medicine holds a vaunted place in society today, it hasn’t always – and won’t necessarily in the future without vigilance. “A hundred years ago,” he says, “medicine was in a hell of a shape. There was very little science and no qualifications for medical school. You didn’t even need a high school diploma.”

The famous Flexner Report of 1910 led to a massive winnowing of medical schools – approximately half nationwide shuttered their doors – and a rigorous new set of standards for the ones, including MCG, that survived. McGinnis cautions students not to take these standards for granted.

“The advances are what led to the average lifespan doubling in the past hundred years,” he says, counseling the medical profession to not only embrace scientific and technological breakthroughs, but to epitomize professionalism, humanism and ethics as well. “Without those three things,” he says, “we run the risk of being just thought of as just a highly skilled technician and losing the high esteem accorded to us by our patients and the public.”

He distills the advice into what he calls the three A’s of good physicians: availability, affability and ability. “Don’t run the risk of being distracted by things like money and politics,” he counsels medical students. “Touch the patient. The patient is everything.”

McGinnis has no doubt MCG students will rise to the challenge. “The quality of the students is just unbelievable,” he says.

McGinnis’ four children and five grandchildren are busy following his examples on their own turf. Son Scott (’89) is a radiation oncologist, son Chris is a business travel writer and television personality on the topic, daughter Susie is an advanced nurse practitioner and daughter Katie is a devoted mom.

At age 84, he hasn’t slowed down a bit (“I don’t like to be unbusy,” he says) and is grateful his experience and expertise are still sought out. Whoever his audience happens to be – students, fellow professionals, legislators, the general public – his message resounds with optimism.