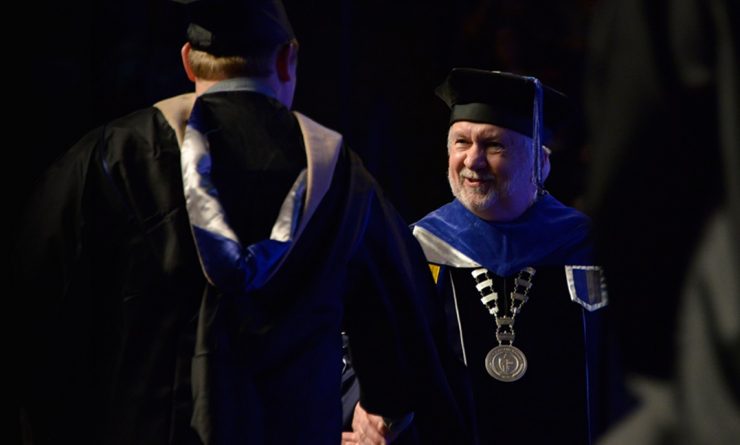 Keel said the task, which he referred to as the university’s “tripartite mission” of service, education and research, presents the university with both “unique responsibilities and unprecedented opportunities.”

3 in Inaugural PBC Hall of Fame

The Peach Belt Conference held the induction ceremony for the inaugural Hall of Fame Class on May 31 at the Sonesta Resort Hilton Head Island. Augusta University was represented by former PBC Commissioner, Director of Athletics and head coach Marvin Vanover; men’s basketball All-American Ben Madgen; and former Assistant Dean of the Hull College of Business and Director of Student Support and Advising Mary Lisko.

On the 25th Anniversary of the conference, 25 members of the Hall of Fame were formally inducted. Of the 25 inductees, 19 were present at the ceremony.

After careful examination and discussion of nomination portfolios from across the state, the review committee unanimously chose Deaner to receive the award, according to an award letter from the University System of Georgia.

It’s safe to say: Augusta is now the golf — and disc golf — capital of America.

So say the Jaguars, at least.

On June 9, the Augusta Metro Chamber of Commerce, in partnership with Augusta Magazine, presented the 2016 “Top 10 in 10 Young Professionals to Watch” award at the Chamber’s Member Economic Luncheon at the Augusta Marriott Hotel at the Convention Center.

The award honors 10 rising business professionals between the ages of 25 and 35. Six former winners have gone on to win the Georgia Trend “40 under 40” award.

Augusta students competed against 28 other teams, including representatives from The Citadel, University of North Carolina at Asheville and Georgia Southern University.

Like
Like Love Haha Wow Sad Angry
From the Wire Publications
Share your story
Our best stories often come from suggestions from the campus community.
Submit News