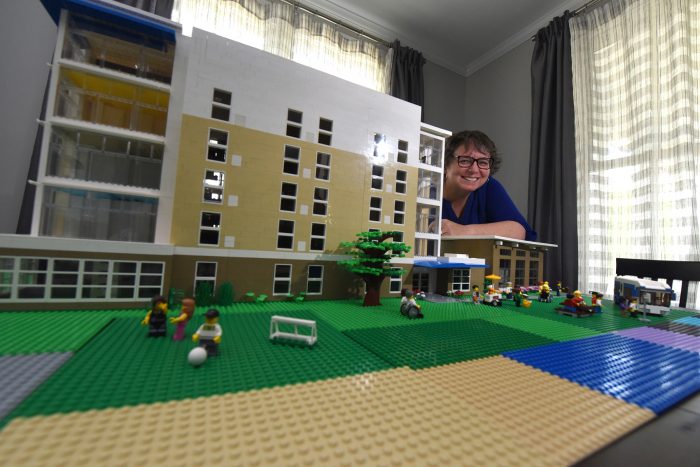 For the past several months, we’ve been hiding a secret as big as Santa’s tool bench, with a colony of elves on top for good measure. We already got our toys even though it’s just September. But we’re ready to reveal how everything came to life on the cover of A.

We wanted to tell the story of our new residence halls in our flagship alumni magazine, but they were under construction during magazine production, which meant we wouldn’t be able to get good photos. So we turned to another type of builder — Lego builder, professor and chair of the Sociology Department Kim Davies.

Provided with an architectural drawing, Kim spent a month assembling approximately 9,000 Lego pieces including bricks, tiles and windows into a replica of Oak Hall. The “small-scale” creation proved to be quite massive, as it soon overtook her six-seat dinner table.

Patiently, Kim worked with Senior Photographer Phil Jones and me as we spent several hours shooting pictures of mini campus scenes in her dining room. But once Phil and I got back to the office, we weren’t satisfied with the lighting or clarity. We decided to reshoot the setup in our studio.

Over the next few days, Kim had to break it apart into two sections and remove the characters (also called figs). She carefully wrapped each unit in plastic wrap, and boxed up the figs and accessories. I searched for a table large enough to hold her creation. While 60-inch tables were common, the structure was 61 inches wide. I had to keep digging to finally find a 6-foot-long folding table. And Phil spent many hours on the internet, exploring all aspects of shooting Legography. (Who knew there was an official term for this type of photography?)

On moving day, Kim and I slid each half of the miniature building onto 3-foot-long pieces of cardboard. We used two SUVs, placing Lego parts in the back of each vehicle and stuffing paper in the trunks for additional padding. Upon arrival, we loaded up and gingerly shuttled a pushcart full of Lego parts back and forth from parking areas to studio, wincing at every bump in the sidewalk. Three hours later, Kim found herself patching up loose Lego building corners and reassembling tree leaves. We also discovered the table had a slight bow in it so had to work to correct the gap in structure.

When we began studio photography, Phil tried to light it from the inside but lights showed through seams and breaks between Lego blocks, so we used umbrella lights on the exterior. Legography is often taken eye-level with the figs, which proved to be hard on Phil’s back so we borrowed more tables to elevate the folding table. For more clarity, Phil shot the background separate from close-up characters; then I used PhotoShop for the final photo illustration arrangement and to camouflage seam problems.

After several photo experiments, some character rearranging and additional digital work, we assembled the final cover scene. If you look closely, you’ll discover details we’ve planted. See if you can match people in our magazine stories with figs in action on the cover.

After months of hiding this creation behind a blanket in our photo studio, we are making plans for a permanent display. When that happens, be sure to take a closer look into this mini world.