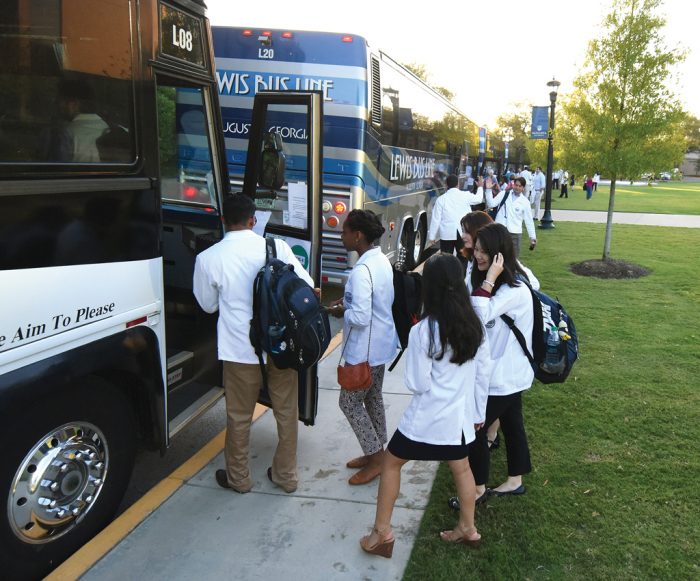 This year, for the first time, the majority of the second-year class at the state’s public medical school toured the state over one week, learning about opportunities to study both in and out of Augusta for their clinically intensive third and fourth years. They visited MCG’s campuses in Savannah/Brunswick, Albany, Rome and Athens, and several sites in between.

It was dubbed “Tour de Georgia.”

The trip wasn’t just about deciding where to spend their last two years of medical school, though. It was also about teaching them about public health issues of the very state they will, hopefully, one day serve, says Dr. Kathryn Martin, MCG’s associate dean for regional campus coordination.

“Traditionally, we have taken smaller groups of students for an overnight visit to our regional campuses, and we’ve taught them about the public health needs of Georgia from a classroom in Augusta. But we can learn in and out of Augusta, and we can learn well,” Martin explains. “This year, we thought, ‘Why not combine the two?’ The overarching objective of the tour was for students to understand how the mission of the Medical College of Georgia – improving the health of Georgians – is critical to their training.”

The adventure gave students a novel way to look at their public health curriculum, adds second-year student Chrissy Callaway. “We were able to learn about region-specific public health issues while in that specific region.” 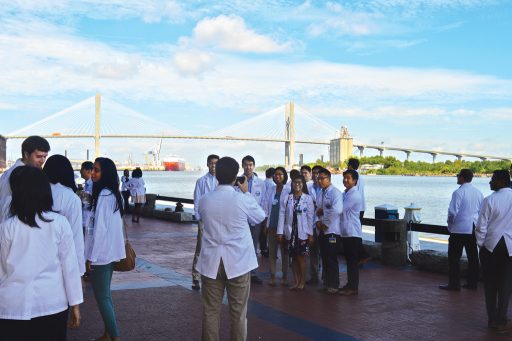 Water has always been a way of life in Savannah, one of the east coast’s busiest port cities. In the 1800’s, it also contributed to the death of 6 percent of the city’s population.

The yellow fever epidemic of 1876 claimed nearly 1,100 lives in Savannah. It would take years before anyone knew what caused the fever, which had also swept the city in 1820 and 1854. Nearly 20 years later, in 1902, the American Health Association determined the culprit was the aegypti mosquito, which could have come in on ships in port and then multiplied due to standing water from heavy spring rains and deplorable sanitary conditions in the city. Prescribed efforts to treat it, like taking cold baths and drinking cold water, were obviously futile, Sophia Sineath, education coordinator for the Georgia Historical Society, told students on the first day of the public health tour.

While much has changed in Savannah in 140 years, at least one thing has remained constant. The port can still be a huge threat to public health in the area, said Dr. Lawton Davis (’79), health director of the Coastal Health District. “Just the other week, we had a ship come in with 20 people who had active chicken pox, so we had to keep them on the ship, go down there and vaccinate them,” he told the group. Part of what’s exciting about public health is that it can mean different things on different days in different places, he said. “It’s really like getting in a blimp and looking down on an area and identifying the issues there.”

It’s a corner of the state where a bad mix of low socioeconomics and lack of access to health care combine to create a battleground of complicated health issues for the people who live there. Widely known for its peanut crops, pine trees and down-home Southern hospitality, health problems such as malnutrition and obesity, diabetes, cardiovascular disease, substance abuse and poor maternal and fetal health plague the mostly rural Southwest Georgia.

Students at the Southwest Campus are a hands-on part of the fight.

“When a patient comes in bleeding to death from an ectopic pregnancy, you’ll be standing across from me and my colleagues at the operating table,” Dr. Darrell Jordan, a Tifton obstetrician and gynecologist and clinical preceptor at the Southwest Campus said to students in Albany.

Third-year student David Mysona shared the same sentiments. “Six hundred and sixty-four,” he proclaimed to students. “That’s the number of patients I’ve personally seen [in the last two months]. On my first day here, I got to personally place the port incisions for a gallbladder removal. We are truly part of the medical team here.”

“I cannot overstate the importance of this program and your presence to our hospital,” he said. “MCG’s mission of educating the next generation and improving health goes hand in hand with our mission of providing the best care and exceeding expectations.”

Over the last seven-plus decades, Battey State Hospital in Rome has served as a treatment center for sick, wounded and disabled veterans of World War II; as a tuberculosis sanitorium – at its peak, housing 2,000 patients; and as a provider for mental health and developmental disability services to hundreds of adults and children.

Today, the sprawling 150-acre campus with its 50 or so buildings, known as Northwest Georgia Regional Hospital since 1973, sits empty and still.

It was shuttered in 2011 when Georgia overhauled its mental health system and relocated 9,000 people with mental illness and developmental disabilities out of hospitals across the state and into communities, Lowell Wilkins, a former administrator at Northwest Regional, told students from the hospital’s former cafeteria. It has sat largely unused since.

The shutdown of many of the state’s mental hospitals, which began in 2010 and has been complicated by the lack of enough community programs, has left many people without adequate access to care and increased the need for community programs and support. Without them, many end up in hospital emergency departments with no place to go, explained Dr. Joseph Seal, psychiatry clerkship director for the Northwest Campus.

In Rome, MCG students can be part of the solution to that problem, according to Seal, who is also medical director at the Crisis Stabilization Unit at Highland Rivers Health, which provides short-term crisis stabilization and mental health and addictive diseases detoxification as an alternative to hospitalization. “Medical students are considered full team members and function as full team members,” he said. “They can start from day one, seeing patients.”

When Dr. Mark Ebell, a University of Georgia epidemiologist and board-certified family physician, was appointed to the U.S. Preventive Services Task Force in 2012, he was excited about the chance to be part of the team that he says uses the best evidence to drive health care policy decisions.

Some don’t feel the same – even dubbing the task force “The Death Panel,” he told students at the Partnership Campus in Athens.

It’s a different view of public health, but one that is important for students to hear. The task force’s primary job is to review preventive health services like screening and medications and then help develop recommendations for health care providers. Each recommendation is associated with a “strength of evidence” rating, which is based on a balance between the benefit and harm. For instance, a recommendation with an “A” rating means the benefits way outweigh the harm, he explained.

And the recommendations aren’t always popular.

As an example, in 2009 and again in 2016, the task force recommended women get mammograms every other year starting at age 50 – not annually beginning at age 40. In its recommendation, the task force cited evidence, writing that “while screening mammography in women aged 40 to 49 years may reduce the risk for breast cancer death, the number of deaths averted is smaller than that in older women and the number of false-positive results and unnecessary biopsies is larger. In addition to false-positive results and unnecessary biopsies, all women undergoing regular screening mammography are at risk for the diagnosis and treatment of noninvasive and invasive breast cancer that would otherwise not have become a threat to their health, or even apparent, during their lifetime. Mammography screening at a younger age and screening more frequently may increase the risk for over-diagnosis and subsequent overtreatment.”

Even with the evidence behind them, the recommendation sparked outrage among some providers and breast cancer survivors – many citing their own cancer diagnoses before age 50.

But it is the job of the task force to take an impartial and honest look at the evidence and make the best recommendations possible based on that, he told students. Popular or not.

The Monster Inside Her Head