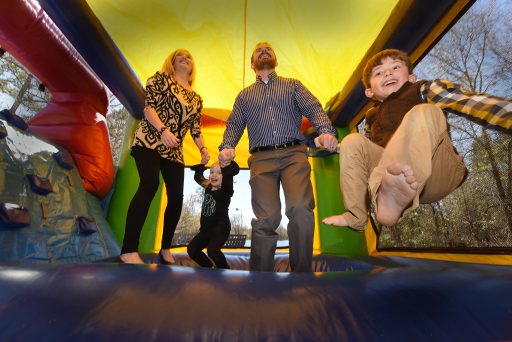 Dental school is challenging. When life threw in a series of personal challenges on top of it, Billy Brinson, a dental student from Swainsboro, Georgia, found he had to be more resourceful than most to meet them.

It started back in high school, when Brinson had his own woodworking shop, a hands-on activity that perhaps foreshadowed his interest in dentistry. “I feel like I was put here to serve others and make an impact on their lives, and there’s no way I’d rather do that than by working with my hands,” says Brinson. He wanted to bring his expertise to dental school.

But his dream was deferred when his dad asked him at age 19 to take the reins of the family hardware store. Brinson was happy to help, but he knew a bigger world awaited him.
In 2008, he built a three-bedroom house for his soon-to-be wife, Mandi. “My dad and I did all the wiring, framing, roofing, insulation, plumbing . . . everything,” he says. But he and his wife had lived in it only two years when Mandi’s father died of cancer. With a heavy heart but a characteristically pragmatic outlook, Brinson sold his house and used the proceeds to finance his dental education.

But even bigger hurdles awaited. The Brinsons’ first child, Bentley, was born with a capillary malformation on his face, necessitating several surgeries. Then came daughter Blakely, who was born with hip dysplasia and a heart defect. As Brinson juggled dental school with these daunting challenges, he continued his building projects and began a business supplying inflatables for parties and other events. “The income helped get us through,” he says.

Most recently, the family acquired a tribe of goats from which they plan to produce and sell milk products. Today, Brinson is in the homestretch of dental school, and both children are doing beautifully. Blakely, who her parents feared might never walk, took her first steps at age 10 months, a milestone that helped correct her dysplasia. Her heart defect seemed to miraculously self-correct as well. Her doctors still can’t explain the stunning turnaround. At age 3, she loves gymnastics and ballet. The children delight in their new “pets.”

After graduating next spring, Brinson looks forward to starting a private practice in a dentally underserved community. Says Brinson, “I’ve learned to stop predicting the future, but if it’s meant to be, the Lord will get me there.”