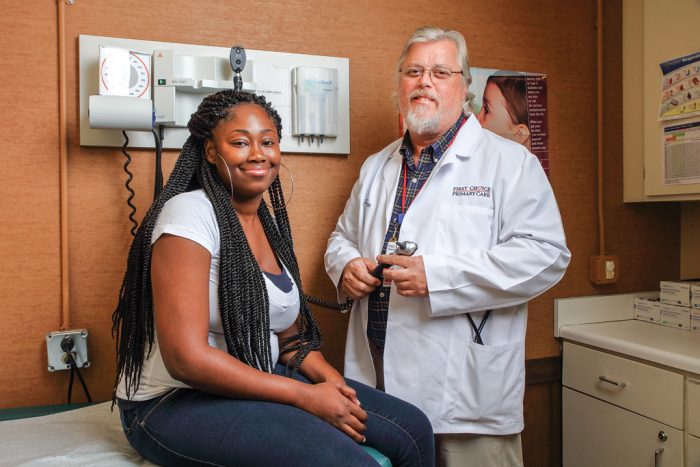 Part of what MCG researchers wish they could implement in their studies is cloning individuals like Dr. Timothy Graves, ’83.

Graves was graduating from MCG about the time Kutlar was doing a three-year research fellowship with famed sickle cell scientist Dr. Titus H.J. Huisman, who would start the Sickle Cell Center at MCG and AU that Kutlar now directs.

Graves picked family medicine as his specialty because it provided him the broadest opportunity to practice what he had learned about patients and their entire bodies.

He grew up in Smyrna, went to the University of Georgia and relocated to Macon after medical school to do his residency at the Medical Center of Central Georgia. The Georgian never left Macon and likely never will.

For nearly a decade now, he has been medical director of First Choice Primary Care, a Federally Qualified Health Center that provides comprehensive health care to underserved areas or populations on a sliding fee scale. In fact, the sickle cell clinic in Macon that Kutlar travels to each month – and his largest outside of Augusta – is at one of Graves’ clinic sites on Emery Highway.

First Choice has been a particularly great fit for the man and physician who wanted a broad practice and has always been partial to treating whomever needed care, regardless of their paying status. He doesn’t consider it a heroic effort, rather just one that works for him. He also readily admits that the business end of medicine is not his forte and that if he had to run his practice as a business, “I would probably have a pen in the back full of pigs and chickens and cows and eggs, and I would be bankrupt.”

But being part of an FQHC helped him realize that even one job loss can take many of us from comfortable middle class to uninsured with no clear avenue for health care. “The housing bubble that burst was really an amazing illustration of that,” Graves says.

Now Graves wants to be part of ensuring that sickle cell patients also benefit from the kind of comprehensive care that attracted him. “I think there is a huge opportunity, which is clearly recognized, that sickle cell disease is undermanaged in the primary care setting,” says Graves. While his own clinic has about a dozen patients with the disease, he doesn’t yet consider the practice anything close to a sickle cell home, but he sure wants it to be. “I think it’s something we should do and could do.”

Graves feels certain that more patients are out there in his community and wonders who is taking primary care of them. He reasons an obstacle to primary care for these patients is the complexity of pain management, and the pain medicine addiction crisis that currently grips the nation isn’t helping.

“Their life expectancy is getting longer and longer so their potential need for narcotic pain management gets broader and broader, not less and less,” he says. So the pragmatist in him gets the concern, but the physician in him hopes to help Kutlar, Gibson and others find a solution.