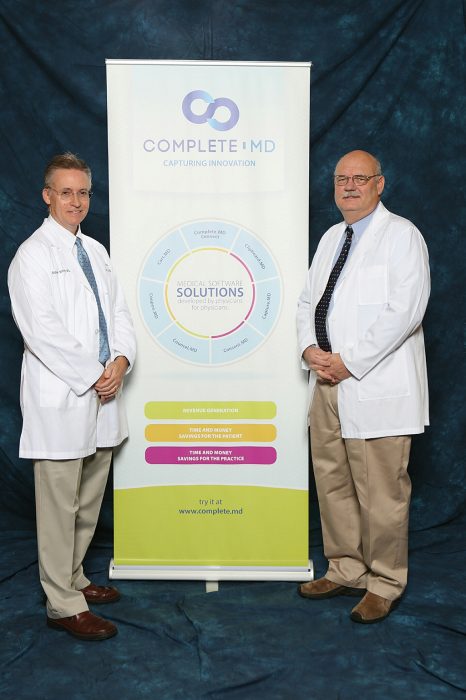 Consider this: When you order a product from a retail site like Amazon.com, you receive an email notifying you when your order was received, when it was shipped and when it will be in your mailbox — and you can track it throughout this delivery cycle. Why can’t you do the same with your pathology report?

That’s the scintillating question that Dr. Sidney Smith (’83) and Dr. Patrick Godbey (’79) are asking. Smith, a dermatologist and CEO of the Georgia Skin and Cancer Clinic in Savannah, Georgia, saw a need for a more efficient, uniform communication system between the clinician and the pathologist. After all, emails might be overlooked, voicemails may be heard one time then deleted and phone calls can be missed. As a result, lab information and important diagnoses can be miscommunicated, delayed or missed. “We decided to build something better,” said Smith.

Along with being fellow alums of the Medical College of Georgia, Godbey and Smith were longtime family friends and had often worked together. Godbey is laboratory director of Southeastern Pathology Associates (SEPA Labs) in Brunswick, Georgia, so with Godbey’s help, Smith brought together a consortium of pathologists from SEPA, Memorial and St. Joseph’s/Candler. “We got them all in the same room and said, ‘Guys, this is not working. How can we communicate better?’” said Smith.

It was a surprising — but welcomed — move. “He gave the pathologists a chance to say here’s what we think, and we gave him the chance to tell us the same,” said Godbey.

Godbey then led the group to come up with 13 recommendation codes that pathologists could use to provide specific direction to the clinicians based on lab results. Those codes would become a key part of a web-based platform and app that Smith and Godbey then developed with the assistance of Dalton, Georgia-based software engineers InventureIT.

And here’s where that Amazon touch comes in: InventureIT’s background included logistics for the carpet industry, which requires that every roll of carpet is marked with a radiofrequency identification (RFID) tag. InventureIT helped Smith and Godbey apply that same system to tissue and other lab samples.

Now pathologists and clinicians who use the Pathology Tracker app tag each specimen with a unique number, which is also tied to that one patient encounter. As the specimen is routed through the pathology lab and the results are sent back to the clinician, everyone — including the pathologist, clinician and patient — can follow where the specimen is at every point. The timed system also sends out alerts to all parties if specimens aren’t picked up within a certain amount of time, if the lab doesn’t send its report and even if the clinician fails to contact the patient to schedule recommended treatment. Also, if the clinician doesn’t communicate the results from the lab to the patient, the lab will. This means that the risk of the patient not knowing the result and the possible need for follow-up is greatly reduced. “The result is a more informed patient and increases their involvement in their own care,” said Smith.

Smith has used the system in his own clinics since 2015 and estimates that more than 100,000 specimens have been run through the platform. He can document that every patient was notified and all treatment loops were closed.

Smith and Godbey have been working with Medicare and will soon launch a three-month pilot project in South Carolina to examine how the Pathology Tracker system and the related Radiology Tracker system can help prevent waste, fraud and abuse and improve the quality of care received by Medicare patients. The physicians’ goal is to see the two systems go nationwide. “The ability to have all of this in one package was lacking,” said Godbey. “We did this because we wanted to improve patient care. That’s the bottom line.”