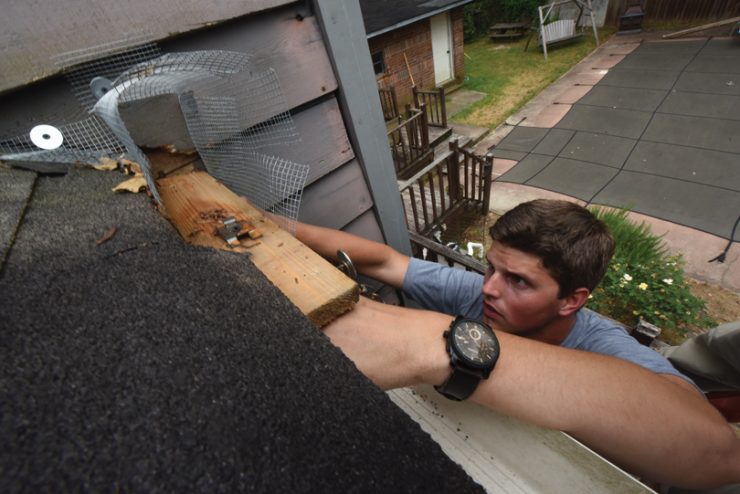 There was that time that he lost his grip on a coyote and got dragged under a truck, or the time he found himself under a porch with several copperhead snakes.

Johnson, a DCG senior, finances his education with the most unlikely of side businesses. He’s the guy you call if you have bats in your belfry, squirrels in your attic, snakes under your porch or, yes, coyotes in your yard. Among other critters.

“I set traps for nuisance animals and try to remove them as safely and humanely as possible,” says Johnson of his business, Jason’s Wildlife Removal. “We figure out how to get rid of them and make sure it doesn’t happen again.”

But his line of work doesn’t mean Johnson isn’t particularly fond of critters. “It takes a great respect for wildlife to do this job,” he says. “I do everything possible to safely relocate the animals.”

Johnson grew up surrounded by farm animals in South Fulton, Georgia, and learned how to set traplines for unwanted visitors. “I got efficient at trapping and removing the animals,” he says, noting that he was licensed as a nuisance animal control specialist at age 17. He used his earnings to buy equipment for a nuisance wildlife control business.

While earning his undergraduate degree at Point University in West Point, Georgia, Johnson kept his business going on nights and weekends. It was only upon entering dental school that he encountered time restraints too formidable even for him. He turned over day-to-day operations to a friend, Austin Eure. “But I still handle all of the business side.”

Upon graduation, Johnson plans to move with his wife, Sydney, to McDonough, Georgia, and join his father-in-law’s dental practice. But he plans to keep his hands dirty during off-hours.

“I grew the wildlife business into something much larger,” he says. “As busy as I am, there always seems to be 30 minutes here and there.”