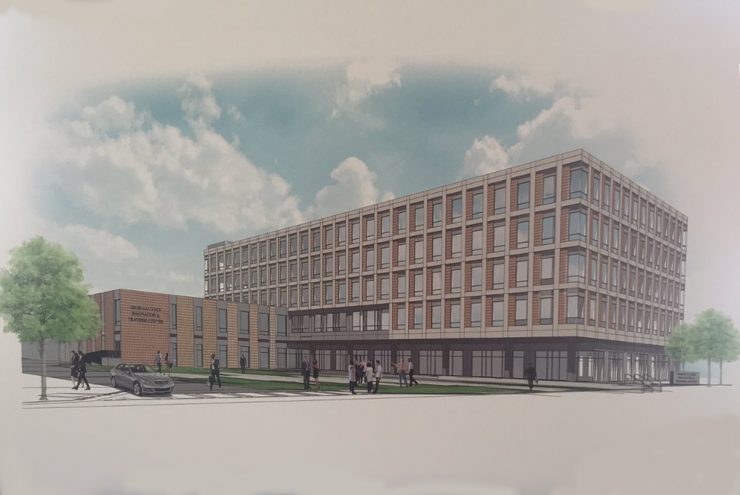 To my fellow alums:

If it’s been a while since you’ve been to Augusta, it’s an excellent time for a visit. What’s going on at your alma mater and its home city is truly historic. We are a city, a university and a health system on the move.

First, there’s the cyber tsunami heading our way. Under Gov. Deal’s visionary leadership, Georgia has invested $95 million for two buildings currently under construction on our Riverfront Campus to comprise the Hull McKnight Georgia Cyber Center. The Georgia Technology Authority is overseeing construction and operation of the 332,000-square-foot center, the first phase of which opens in July.

AU has launched the School of Computer and Cyber Sciences and is adding programs across our colleges, such as Pamplin’s new Master of Arts in Intelligence and Security, to offer students a peerless education in these fields.

Gov. Deal’s proposed budget includes $50 million in bonds to construct a new home for the College of Science and Mathematics on our Health Sciences Campus, allowing expansion of our other colleges on Summerville while placing math and science undergraduates at the center of state-of-the-art research and lab facilities.

And that’s only on our campuses. We’re launching an expansion of our health system ambulatory care facilities around the region and planning for construction of a hospital in Columbia County. Ft. Gordon’s footprint is expanding as its cyber mission continues to grow. The City of Augusta is building a $12 million parking deck for the training center and gearing up to welcome and accommodate an influx of newcomers.

As alumni of our university, you are integral to the journey that has brought us to these exciting times. We hope to see you at Alumni Weekend, Apr. 27-29, so we can show you firsthand.

Dr. Irving Victor (MD ’45) received the second-ever Eminent Alumni Award from Armstrong State University in 2017. He was recognized for his service to Armstrong, to his profession and to the community.

Dr. William B. “Butch” Mulherin (MD ’61) is the 2017 Bill Hartman Award recipient at the University of Georgia.

Dr. Irving Pike (MD ’78) was elected by the membership as the 2017-18 president of the American College of Gastroenterology (ACG), a national medical organization representing more than 14,000 clinical gastroenterologists and other specialists in digestive diseases. Dr. Pike officially took his position as president during the college’s Annual Scientific Meeting at the World Congress of Gastroenterology.

Dr. Steven Kitchen (MD ’85) was appointed to the Georgia Board for Physician Workforce by Gov. Deal.

Dr. Douglas Lundy (MD ’93) was elected president of the American Board of Orthopaedic Surgery.

Brig. Gen. Ronald T. Stephens (MD ’90) received the National Defense University’s Certificate of Appreciation, adding to previous recognition, including the Legion of Merit, the Bronze Star Medal, the Defense Meritorious Service Medal and the Army Commendation Medal. He has earned the Expert Field Medical Badge, the Parachutist Badge, the Air Assault Badge and the Airborne wings of the French and German armies.

Dr. Amy G. David (DMD ’09) was highlighted in the publication Leading Physicians of the World.

Dr. Wesley Davis (MD ’05) is division chief of pediatric cardiology at the Children’s Hospital at Erlanger in Chattanooga, Tennessee.

Brigitte Holmes (BA ’02) was one of five finalists for Teacher of the Year in the Richmond County School System in Augusta, Georgia.

Martha Messick (EdS ’13) is principal of the new Aiken Scholars Academy, which will open at USC Aiken next fall to Aiken County Public School District students.

Meagan Philip (MS ’13) was featured on WJBF News Channel 6 to share her expertise on the warning signs of suicide.

Dr. William F. Hamilton invents the Hamilton manometer, which reflects light off a mirror onto photosensitive paper and helps pave the way for electrocardiogram technological advancement. In later years, the Hamilton Wing of the Research & Education Building was named after him.

Franklin D. Roosevelt swears in for his fourth term as President of the United States, the only president ever to exceed two terms. Later that year, Roosevelt suddenly dies at Warm Springs, making Vice President Harry S. Truman the 33rd U.S. President.