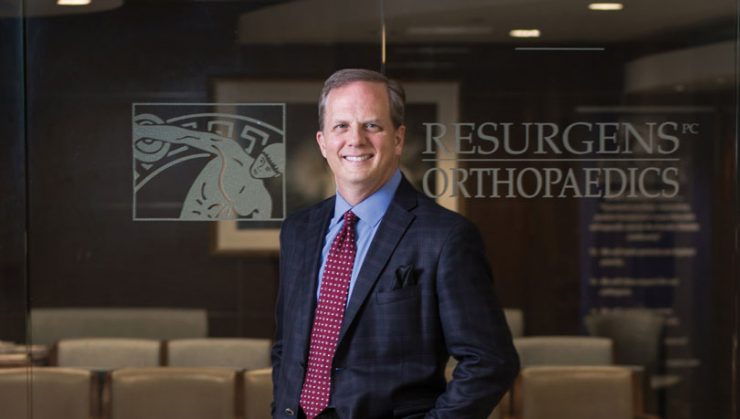 But it wouldn’t have been Plan A. Not that there is anything wrong with a career in pharmacy or in veterinary care, if they’re your first choice.

But Lundy—who today is an ortho-paedic trauma surgeon and co-president of Atlanta’s Resurgens Orthopaedics—had always imagined he’d be a doctor. Even after his friends told him, “You’ll never get in, it’s too hard.” Even when he was rejected from his first-choice medical school, the Medical College of Georgia—first, then a second time.

Still, hard work and determination run in his Irish veins. “My father was a first-generation Irish immigrant, and an electrician and an engineer,” said Lundy. “He was the first in his family to be born in America. He worked as hard as any doctor—70, 80 hours a week, all the time. He’s who I modeled myself after.”

Lundy’s mornings often start early, in the dark of 4 a.m., unless he doesn’t sleep at all because of an emergency case. Even before he gets out of bed, he’s on his phone, checking emails and texts, planning out his day. Although he has held the role of co-president of Resurgens—which has more than 20 locations and 100 physicians across the greater Atlanta area—since 2014, he continues to see patients and operate three days a week and many weekends. The clinical piece is something he would never give up. “It’s the best job in the world,” he said.

The success and where he is today continue to surprise him, since it wasn’t something he necessarily pursued. In 2012, Lundy was elected to the American Board of Orthopaedic Surgery, where he served as treasurer and chair of ABOS’ Oral Examinations Committee, until he was tapped to be president-elect this year. He is also chief financial officer-elect of the Orthopaedic Trauma Association and was chair of the American Academy of Orthopaedic Surgeons Council on Advocacy.

“I didn’t have any expectations,” said Lundy. “I just came and worked and put my head down and did stuff. Looking around now, I’m like, ‘How did this happen?’ It was not planned.”

But in many ways, that rejection from medical school was a wakeup call.

After graduating from North Georgia College under a military scholarship and receiving his first medical school rejection letter, Lundy went into the U.S. Army’s Infantry Basic Officer Leader Course and completed his initial training. After moving back to the reserves, he applied again to medical school, veterinary school, pharmacy school, even masters programs and got into them all—all except medical school.

So he took a deep breath and chose an option. Yet after a short time in pharmacy school, Lundy realized, “This isn’t me.” At the same time, his friends who had remained active in the army full-time were moving up in the ranks and other friends who had entered masters programs were well on their way to earning their diplomas—“And here I was doing something I didn’t want to do.”

Still, many would have just stuck with their choice. Not Lundy. “I really threw down and studied hard in pharmacy school,” with a goal of making the grades so he could apply one more time. It would take another two years of work, but he was accepted into the Medical College of Georgia Class of ’93.

“I was one of the last people to be accepted, three to four weeks before class started,” admitted Lundy. Lundy was in Yakima, Washington, doing a joint command exercise with the Marine Corps and Army combat ops when his mother called with the news. “I had to suddenly and quickly separate from the army and get to Atlanta, then get to Augusta.”

At MCG, Lundy poured 100 percent of himself into the work. Chalk it up to his time in the infantry, where it was full blast, all the time, with no sleep and no time even to complain about the lack of sleep. And he loved it.

Every rotation appealed to him too. But he kept coming back to his first thought: orthopaedics. “The only doctor I ever saw growing up was an orthopaedic surgeon,” he said. “I never got sick. I was always breaking or spraining or twisting something, so it was off to Dr. Chip Pendleton.”

When he rotated on the trauma rotation, he knew immediately: This is what I want to do. The days and often long nights of jumping in to take care of fractures and life-threatening injuries appealed to that “go full blast” side of his personality. “It selects you,” he said. “The frenetic lifestyle chooses those of us that it appeals to…We just do such cool stuff…I’m 53 now, and it never gets old.”

MCG was also where he developed the mindset about his life and his career. “Being a doctor is a calling. It’s more than a job. It’s what sets you up in terms of how you treat people and why you do what you do. We see a lot of entitled doctors and surgeons out there…and that’s against what we learned at MCG. [There, it was] ‘It’s not about you, dummy.’ It’s about everybody else. That’s why you’re here. Just get up, do your thing, figure this out and stop the problem.”

After graduating near the top of his class and completing a residency in orthopaedics at Georgia Baptist Medical Center in Atlanta, followed by an orthopaedic trauma/foot and ankle fellowship at Vanderbilt University Medical Center, Lundy went for a time to practice in Fort Collins, Colorado, with his family, wife Peggy and sons Zack and Ryan.

Still, Atlanta was home. After his mother-in-law died, he and Peggy both realized that their sons were growing up without knowing the rest of their family. So when an opportunity came available at Resurgens, he signed up, with a goal of just doing his thing—fixing fractures. But when you’ve been a combat infantry officer in the army, leadership tends to come naturally. The previous leadership at Resurgens recognized that. Lundy was brought on as part of a succession plan.

Since becoming co-president of one of the state’s leading orthopaedic clinics, Lundy’s focus has been on building on the success of those previous leaders. “My job was to stand on their shoulders and take the practice to the next level.”

Resurgens’ rapid growth came in part from merging several practices into one. As difficult and challenging as that process was, it was just as hard to consolidate the cultures in order to make the practice seamless and consistent, from the policies, forms and the type of furniture to patient outcome measures.

“We wanted everything to be identical,” he said. “It’s worked really well.” So well, in fact, that the Atlanta Journal-Constitution last year ranked Resurgens the number 3 large workplace in metro Atlanta.

The work is never done—and that’s the way Lundy likes it. But in his free time, he spends every moment with his wife and now older sons who will soon be graduating college and most definitely not attending medical school. With one son’s goal to attend Auburn and work at Walt Disney Corp. and another to work with animals, the medical profession is not their Plan A. In between, Lundy frequently travels to Africa for medical missions work, where he is working to train African doctors to become surgeons.

Sometimes too, he will speak at his sons’ schools. And the story’s not about a high-powered doctor, not really. It’s about that kid who just graduated college in 1986, with a medical school rejection letter in his hand.

“The whole thing is, never give up. Just continue to improve your position and continue to push. Don’t let anybody tell you you can’t. If I had listened, I would have stopped way before this.”