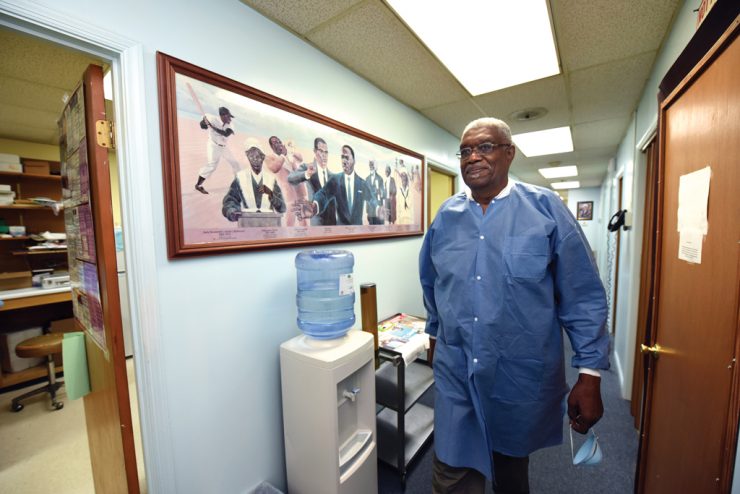 Impact on Georgia: ‘Our Aim is to Help’

A father-and-son pair of dentists have cut an exceptionally wide swath of service in Georgia.

Dr. Edmond Franklin (’78) has so enjoyed his career — hanging his shingle as the sole African American dentist in Burke County, Georgia, almost 40 years ago — that his son, Dr. Edmond Michael Franklin, happily followed in his footsteps. The path was a bit circuitous for both of them — the elder Franklin began his career as a pharmacist, his son as a businessman — but both eventually found the same niche.

“Several people in my family graduated from The Dental College of Georgia, so I was surrounded by the dental career all my life,” says the younger Franklin. “Dad always impressed on me the advantage of being able to call your own shots while helping others.”

His dad, an Augusta native, was particularly attracted to rural Georgia when he began his practice, eager to help the underserved. “I opened my practice in Waynesboro in 1980,” says the elder Franklin. “I still live in Augusta, but I enjoy the commute. It gives me time to reflect, to plan and to make good decisions.”

His son opened practices in the Atlanta suburbs of Jonesboro and College Park. Today, the three practices are called Vivid Smile Dental Centers, and all three emphasize treating patients like gold. “You treat people how you want to be treated,” says the younger Franklin, who earned his degree from Howard University School of Dentistry and completed the DCG’s implantology maxi course. “We spoil our patients, and that keeps them loyal.”

Both father and son also welcome DCG students into their practices for clinical rotations. “We all need help when we’re learning, and the students help me as much as I help them,” says the younger Franklin. “They keep me on my toes, they really do.”

Says his father of the students who rotate through his Waynesboro practice, “I think they enjoy coming down here. Some of them have even rotated through here twice. I don’t like working under pressure, and I don’t create pressure for others. We go out of our way to be patient and understanding. I’ve been through the maze of dental school, and I know what they’re going through. Our aim is to help.”