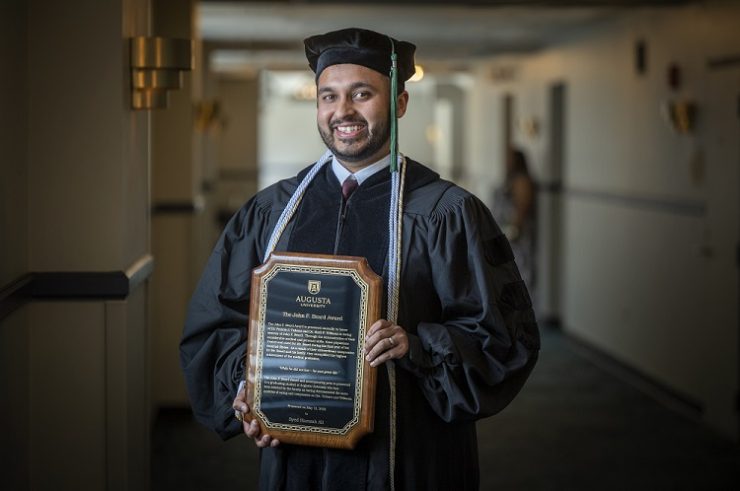 Those are just a few words used to describe Dr. Hamzah Ali, a 2022 MCG graduate and the recipient of the 2022 John F. Beard Award for Compassionate Care.

Ali attended the Augusta University/University of Georgia Medical Partnership, MCG’s four-year campus in Athens. “Hamzah stands out amongst the top 1-2% of service-oriented, selfless and compassionate students I have ever met,” says Dr. Shelley Nuss, campus dean at the Medical Partnership.

As an undergraduate at the University of Georgia with an interest in health equity and social determinants of health, Ali, who hails from Columbus, Georgia, worked with Dr. Suzanne Lester, family medicine site clerkship director at the Medical Partnership, to assess the feasibility and subsequently establish a multidisciplinary free mobile clinic to provide health care to the underserved.

The clinic also has provided meaningful perspective to future generations of physicians.

“When (he) helped design the (clinic), little did he realize the impact would be much greater than getting care to people who needed it,” says Dr. Theresa Rohr-Kirchgraber, a professor of medicine at the Medical Partnership. “He also helped instill in his colleagues, and the medical students to come after him, firsthand knowledge of how social determinants impact health for individuals in our own community.”

This summer, Ali began an internal medicine residency at the University of Texas at Austin’s Dell Medical School.

The $40,000 Beard award is given annually by William Porter “Billy” Payne and his wife, Martha, to a graduating MCG or other health sciences student at AU who exemplifies caring and compassion in health care. Payne, the immediate past chairman of the Augusta National Golf Club, established the award in 1998 in memory of his father-in-law, who died of cancer in 1997. The award honors Augusta University President Emeritus Francis J. Tedesco and Beard’s physician, Dr. Mark F. Williams, a 1988 MCG graduate who treated Beard during his hospitalization at Augusta University Medical Center.