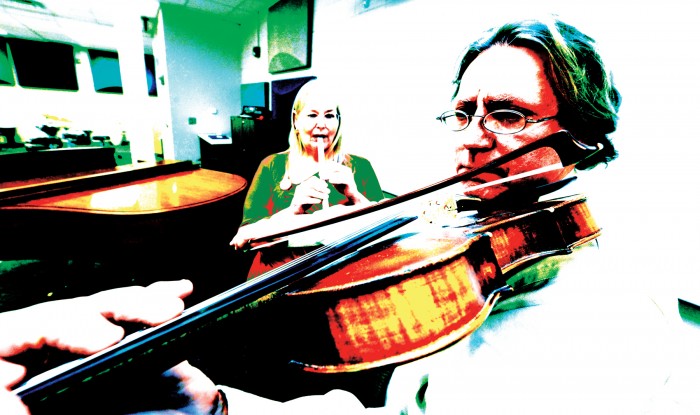 Multidisciplinary Research Seeks to Harness the Healing Power of Music

YOU’RE DRIVING TO WORK IN RUSH-HOUR TRAFFIC, NIBBLING A FINGERNAIL AS YOU ANTICIPATE THE STACK OF WORK AWAITING YOU ON YOUR DESK. YOU OVERSLEPT AND MISSED BREAKFAST, AND YOU’LL PROBABLY HAVE TO WORK THROUGH LUNCH.

OH, AND SOME JERK JUST CUT YOU OFF IN TRAFFIC.

BUT THEN something transformative happens: A song comes on the radio. It’s a song from your youth, one that served as the soundtrack for your first crush. A smile spreads across your face. You relax your shoulders and ease your grip on the steering wheel. Your breathing and heart rate slow. This song has changed your mood – indeed has changed your health – at least temporarily.

Carl Purdy, an Instructor in the Georgia Regents University Department of Music, wants to know how. He and a group of multidisciplinary colleagues are capitalizing on the intuitive grasp of music’s healing properties to try to harness the full potential of the phenomenon.

“WE GRAVITATE to music for a reason,” he says. “We just don’t know definitively with scientific research exactly what that is.” Purdy and his colleagues want to find out how specific frequencies of sound affect people, and how those frequencies can perhaps be used as a healing mechanism.

After years of performing as a musician, Purdy has witnessed the effects of music and wants to understand people’s love affair with it. He wants to know how to take his knowledge of music and delve further into music’s manifestations inside the body.

He says Cymatics may hold the key.

Cymatics is the study of sound’s ability to create geometric shapes. This is accomplished by subjecting a thin coating of particles, paste, or liquid to different frequencies, using the surface of a plate, diaphragm, or membrane.

Dr. Hans Jenny, a physician and natural scientist, coined the term when studying the visual display of sound in the 1960s and ’70s, determining that different frequencies of sound create different shapes.

And in the 1990s, Dr. Barbara Hero, an artist, composer, mathematician, and writer, determined the specific frequencies at which our individual internal organs vibrate. From this information, Purdy says, a hypothesis arises: If an organ isn’t vibrating at its optimal frequency, can we manipulate the vibrations by subjecting the organ to the frequency of sound that matches that of a healthy organ and, thereby, restore the organ’s health?

HE SAYS when we create frequencies, meld them into melodies, and layer them with other frequencies, we’re essentially orchestrating a way to heal.

Complementing Jenny and Hero’s work, Dr. Daniel Levitin, James McGill Professor of Psychology, Behavioural Neuroscience, and Music at McGill University in Montreal, Quebec, and author of This Is Your Brain on Music, has used electroencephalography to record electrical activity along the scalp and determine how the brain processes music.

Purdy says, “We know [when we listen to music] it lights up every region in the brain – it’s the only thing that does this. Could it be that our very structure is somehow created by it?”

As a result of these and other studies, which have taken place over the past 10 years, Purdy and Dr. Debra van Tuyll, Professor in the GRU Department of Communications, have invited GRU faculty to form a music research group in conjunction with GRU’s Division of Clinical and Translational Sciences. They have found a great deal of interest throughout the university and health system in exploring music’s role in health and medicine. The participants, representing the fine arts, social sciences, humanities and medicine, are excited to join forces and
conduct the necessary research. Dr. Gaston Kapuku, Associate Professor of Cardiology and Pediatrics, is overseeing the medical component. Dr. Dustin Avent-Holt, Assistant Professor of Sociology, Criminal Justice, and Social Work, is overseeing the social science.

FOUR STRAINS of inquiry were identified at the group’s first meeting: the science of music, translational/therapeutic uses of music, the effects of music on culture and individuals, and creative scholarship.

“[They] tie in under the big umbrella of musical communications,” van Tuyll says. “And there are lots of different things you can do with music communications.”

Music is already being used as therapy at GRU; for example, you will hear a harp player just about any time you walk into the GRU Cancer Center. “We do know there is an impact; what we don’t know is why,” van Tuyll says. “That’s what the Science of Music Group wants to find out.”

SHE SAYS, “My dream for that project in particular is that we will be able to develop [the musical equivalence of the precision of] the Gamma Knife to know what kind of music is best to treat what kind of patient with a particular condition.” For instance, Bing Crosby tunes may lower the blood pressure of one person while raising it for another.

“THE NEXT STEP IS TO SEE HOW THE PREFERRED MUSIC AFFECTS THE BODY. ONCE WE KNOW THAT, WE’RE ONE STEP CLOSER TO SAYING, ‘BECAUSE OF WHO YOU ARE – YOUR AGE, YOUR DEMOGRAPHICS – THIS TYPE OF MUSIC WILL BRING ABOUT A GOOD OUTCOME FOR YOU.’” –DR. DEBRA VAN TUYLL

Van Tuyll and Purdy have explored this type of social sciences project as a class project in their honors course, “Breaking Boundaries,” where they researched student preferences. Van Tuyll says, “The next step is to see how the preferred music affects the body. Once we know that, we’re one step closer to saying, ‘Because of who you are – your age, your demographics – this type of music will bring about a good outcome for you.’”

The area of research that piques van Tuyll’s interest most, though, is music’s influence in shaping culture. “The culture you come from determines the demographics that determine the preference you have for music and, therefore, what music will be best to treat you.” This is how culture fits in. “It’s roundabout, but still important. For me, that social sciences part is key — but it’s not an obvious key — because culture shapes who we are as individuals.”

She plans to study the transmission of culture through music. Jimmy of the Mill’s Pub in Upperchurch, Ireland features sessions of songs that date back to the 18th century and have been handed down aurally. The session she’s involved with has been conducted for over 50 years in the same place, and some of the original musicians still perform. The children there will pass on the tradition to their children, shaping mindsets and values. “This is what symbolic interactionism says is going on,” van Tuyll says.

She says Jimmy Ryan, the pub’s owner, is who Jimmy Ryan is because he grew up in Upperchurch participating in these sessions. Ryan has a different mindset than someone from an urban area such as Dublin. So, music that might be incorporated into the medical treatment of Ryan is not what would be used to treat someone from another region.

Purdy says initial research will subject a test group to various music frequencies to develop some baselines. Researchers will use magnetic resonance imaging to see where music registers in the human brain and determine if the same areas light in all people. “If so,” Purdy says, “this will tell us something; if not, that will tell us something, too.” He muses, “Will there be certain frequencies that will be that musical Gamma Knife?”

He hopes to eventually see an expansive music therapy program develop at GRU, where students will be involved in the research as well as the hands-on applications.

IN THE MIDDLE of the 18th century, Ernst Florence Friedrich Chladni (1756-1827) threw salt on a thin metal plate and rubbed the edge with a violin bow. Surprisingly, the tonal vibrations from the metal plate caused the salt to form various patterns. So impressed by his discovery, he dedicated a major part of his life to further investigations and published his findings, ‘Entdeckungen über die Theorie des Klanges (Discoveries in the Theory of Sound)’. The book, published in 1787, proved that the pressure derived from sound waves affects physical matter, and because of its relevance, Chladni is considered the father of acoustics.

Fast forward to the 1960s. Swiss physician and natural scientist Hans Jenny (1901-1972) rediscovered Chladni’s work and began his own experiments that he called “cymatics.” Derived from Greek words ‘ta kymatika’ meaning “matters pertaining to waves,” cymatics is now the accepted scientific term for the study of sound’s ability to create geometric shapes.

Jenny’s discoveries were published in two volumes, “Cymatics – A Study of Wave Phenomena and Vibration” (1967 /1972). Jenny noticed that the snowflake-like patterns, created by vibrations, oscillations, and rhythmical pulses can be found almost anywhere in nature. Such findings led to his hypothesis that biological evolution is a result of vibrations.