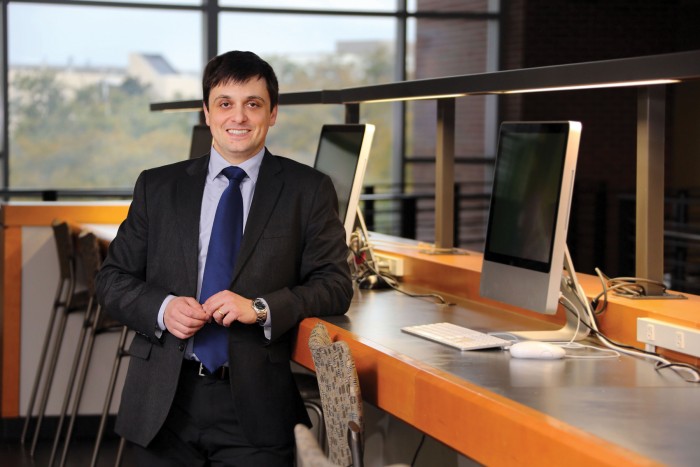 QUICK, take a look at your smart phone.

That’s likely not a problem: The phone is probably no more than an arm’s length away, and it almost surely accompanies you wherever you go. Now that you’ve got it in your hand, consider what you’ve used it for in, say, the past week.

You undoubtedly used it as a phone, and probably snapped a few photos as well. You likely used it to surf the net. Maybe you listened to a podcast as well . . . or read a book . . . or viewed a video . . . or created a video. It wouldn’t be at all unusual if you did all these things, and more.

GEORGIA Regents University’s recently recruited Chairman of the Department of Clinical and Environmental Health Sciences envisions even more uses of a smart phone, uses that his research has demonstrated can dramatically enhance the lives of some of society’s most vulnerable citizens. He has already made some of those uses a reality, and he’s working to bring others to fruition as well.

“Technology gives us the opportunity to reach out to different populations, to everybody who needs it,” says Dr. Gianluca De Leo, who combined his bioengineering and bioelectronics PhD with an MBA to optimize his expertise and his reach. “I am interested in doing research that impacts the lives of people now.”

He has piggybacked onto all kinds of cutting-edge technology – videos, computer software, smartphone apps – to improve the lives of those with diabetes, Alzheimer’s, cerebral palsy, autism, and other conditions.

For instance, before joining GRU, he and his colleagues at Old Dominion University created software enabling children with cerebral palsy to rescue a princess from a dragon by walking a virtual path on a computer screen. What they were actually walking on was a treadmill, but the dazzling and exciting virtual world unfolding on the computer screen in front of them – a world in which they were the star – kept them engaged and motivated.

“We used simple technology,” De Leo says. “All you needed was a DVD player, a television, and a treadmill.”

The result? “The children’s ambulation improved,” he says. “If you can motivate the child to walk for nine hours every two weeks or so, we found that the ambulation skills improved significantly.”

HE ALSO worked with Federal Emergency Management Agency responders, giving them online training to enhance their teamwork skills when deployed to emergency sites. “These are very skilled professionals – physicians, nurses, and others – who may be deployed to the other side of the world with 24 hours’ notice, and they don’t know each other,” De Leo says. “You don’t have to worry about teaching them how to do their jobs, just how to do their jobs together. The online training made it kind of like they already knew each other, and teams who train online perform better.”

De Leo’s research really took off with the advent – and now the ubiquity – of smart phones. For instance, when his grandmother was diagnosed with Alzheimer’s disease, he and his colleagues created an app that automatically snaps photos every five minutes. Patients can review it every week, “remembering what they were doing and recalling their enjoyment of various experiences,” De Leo says. The visual archive helps remind them, for instance, when to eat a meal or watch a favorite television show.

“I Click I Talk helped my son, who has a diagnosis of autism and severe dysphasia. I was able to add familiar images and change the text to Czech.”  – Monika, Czech Republic

Yet another application was creating an automated telephone call center to help educate, monitor, and assist people with diabetes and their families.

But nowhere has the smart phone proved as invaluable as in helping children with autism and other communicative limitations. In 2010, De Leo and his colleagues launched an app called I Click I Talk.

The app, also available as software for computer pads, laptops, and desktops, presents a screen with images representing various categories – food, for instance. The child drags images from the screen to create sentences, such as, “I walk home.” De Leo has expanded greatly on the concept to keep adding new features and functionality, such as using the parent’s, teacher’s, or child’s own voice; tracking progress; creating “memory” to determine which images are used most often; and enabling the software to be customized with personal photographs.

“Working with three autistic classrooms ranging from K to grade six, this application is a definite must have.” – Shelly, Speech-Language Pathologist, Portsmouth, Virginia

“WHEN I go to schools and present this, I keep changing it and adding more functionality based on what teachers and parents want,” he says. “It can be used with any language, and it’s flexible enough that anybody can use it, including those with traumatic brain injuries. You can even find people in Saudi Arabia using it.”

The technological hurdle, he notes, was the biggest factor in bringing his innovations to the masses. “[Virtually] everybody has a cell phone,” he says. “Before, it was more difficult to reach out to various populations, but now, the potential is incredible. And these tools are becoming increasingly affordable.”His research and innovations, he says, reflect equal parts art and science. “My background is in bioengineering, and my business degree definitely helps,” he says. “But the creative component is very important, too. Maybe because I’m from Italy, I have a different way of seeing things – not better, just different.”

And he stresses that his achievements would have been impossible without teamwork. “I’m convinced that nobody achieves anything alone,” he says. “You always have to collaborate. All of my projects – yes, I was the principal investigator – but it was always a team effort. I’ve worked with graphic designers, occupational therapists, speech pathologists, psychologists, neurologists – a wide range of experts.”

IN FACT, his keen appreciation for collaboration was one of GRU’s biggest selling points when he was recruited. “I was very drawn to this university because of the opportunities for interdisciplinary collaboration. We can’t work in silos. Professionals have to talk to each other and communicate. And it’s important to teach our students how to interact with people in other disciplines.”

“I am in LOVE with this program. It is so wonderful and easy to use.” – Kara, Speech Therapist, Williamsburg, Virginia

He also relishes GRU’s “worldclass” Simulation Center, a virtual nirvana if there ever was one.

“I’m very excited about the potential to continue my research using GRU’s excellent resources,” he says. “I like bringing research to reality.”