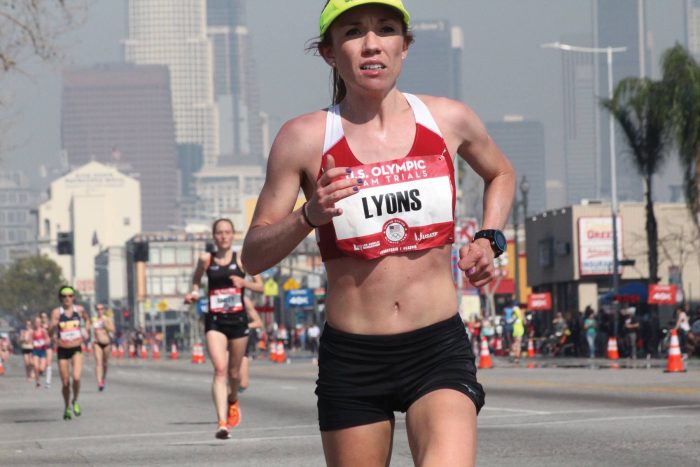 When Bridget Lyons was told upon enrolling at Augusta University that dental school is a marathon, not a sprint, the message couldn’t possibly have fallen on more receptive ears.

Lyons tends to liken every challenge to a marathon because many of her challenges actually are marathons.

“I started running in high school,” says Lyons, who earned her dental degree in 2015 and now practices in Austell, Georgia. “I grew up playing soccer, and I really loved it. I was the only one on the team who liked the running part. I started running cross-country my sophomore year in high school, then joined the University of Georgia track and field team.”

Her passion for the sport was so intense that she actually built a career around it. She practices dentistry three days a week and runs competitively with the Atlanta Track Club on her off days. She’s been so successful that she recently competed in the Olympic Trials, a qualifying half-marathon in Los Angeles. “The three fastest runners will go on to the Olympics,” Lyons says. “I didn’t make it; my goal was 2:35, but it was very, very hot, and I finished at 2:45. I wanted that time, but just being there was incredible.”

Back home, she runs in all kinds of conditions: parks, trails, city streets, sometimes with teammates and sometimes solo. She loves it all. “I like variety,” she says. “If I run by myself, it’s a good time to think and decompress. If I run with other people, it’s fun to interact and push each other. I’m not the most talented runner, but as long as you’re motivated and keep your head in the game, you’re just as competitive as anyone else.”

She applies the dedication to every other pursuit, including dentistry. “Serving the community is what I always wanted to do,” says Lyons, who never really considered any training ground other than Augusta University. “My mom was a physician there when I was growing up (Dr. Jill Miller, who oversaw student health during her tenure) and it always felt like home. It was definitely my first choice.”

The laser-like focus she cultivated on running tracks served her well in dental school, she says. “I knew it would be difficult, but it’s not anything you can actually be prepared for until you experience it,” says Lyons, noting that her only disappointment was having to put her running on the back burner during those strenuous years. “But I still loved it. It was a great school, and my class was the first to be in the new building, which was really cool. They offered us so much.”

And she found the same collegiality in the classroom that she finds with her fellow runners. “My class was awesome,” she says. “We were really close, and everyone was going through the same thing. I always had someone to talk to and people to empathize with me.”

Today, she extends that empathy to her patients at Austell Smiles Dentistry. “As a patient, you can expect a warm and caring environment,” she says on the practice’s website. “Patients are my priority, and I will listen to you and understand your dental needs. My philosophy is to establish lifetime relationships with my patients.”

Her fluency in Spanish is one of the many skills she has cultivated over the years to optimize her rapport with a wide variety of patients. “Being in the medical field, having the ability to reach more patients with a different language is very useful,” she says.

Lyons concedes that her twin passions consume nearly every waking moment, but that suits her just fine. “I feel like everyone can make time for what’s important to them,” she says. “You balance it out and try to enjoy the ride.”