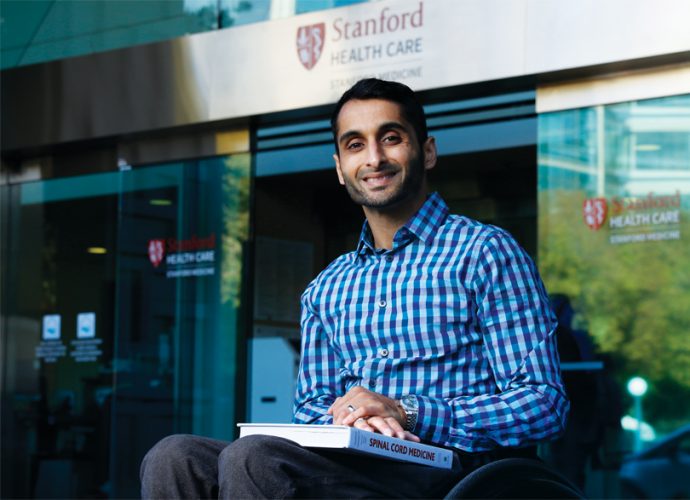 Before is when he was a recent University of Georgia graduate eagerly anticipating starting school at the Medical College of Georgia with dreams of becoming a pediatrician.

After is when he fought back from an accident that nearly took his life and left him paralyzed.

After is when he graduated from MCG and chose a career in physical medicine and rehabilitation.

His specialty is a field he believes was his life’s purpose all along. This fall, he started a spinal cord injury fellowship at Stanford University, with hopes of treating patients who are, like he once did, learning to live a new normal in his life after.

After scouring Augusta for a place to live during his four years at MCG, Aslam and his family had piled back into their SUV to head back home to Snellville, Georgia, where he planned to spend his last free summer soaking up time with family and friends.

It was a soggy day, and they had barely made it out of Augusta when their SUV hydroplaned, exited I-20 and hit a tree, knocking it from its foundation. That tree landed on Aslam.

He was life-flighted to the trauma center at Augusta University Health, where doctors worked furiously to save his life. His injuries were grave – punctured lungs, broken ribs and, most severe, injuries to his brain and spinal cord at thoracic vertebrae 2, where the corresponding nerves affect muscles in the upper chest, mid-back and abdomen.

For two weeks, he lay in a coma in the hospital’s shock trauma unit, only waking up after he was transferred to Atlanta’s Shepherd Center for rehabilitation.

“I don’t remember the accident or anything for at least two weeks after – absolutely zero,” Aslam says. “I remember waking up at Shepherd, but not knowing where I was or why I was there.”

Now paralyzed below the chest, adjusting to life on wheels is what lay ahead – certainly not the next three months Aslam had been envisioning before the accident.

“I remember having a family meeting after my injury with the doctors, therapists, my dad and a family friend who was a doctor, who my dad brought along to help us translate complex medical terms,” he says. “I remember very vividly: My doctor looked at me and said, ‘You have a one percent chance of ever walking again.’”

Thinking in his head that one percent was enough to hold on to, Aslam did concede that starting medical school probably wasn’t going to happen that August. He delayed his entry for a year and got to a different kind of work.

Months of grueling physical and occupational therapy sessions helped him recover from an injured right brachial plexus, the network of nerves that sends signals from the spinal cord to the shoulders, arms and hands. “I couldn’t lift my right arm for several months,” he remembers.

He also learned to use a wheelchair, to drive an adapted car and to live independently.

And he talked often of his dream to become a physician and recovering in time to go to medical school the following August.

“I remember one of the nurses saying to me, ‘Oh, you want to be a doctor? You should be a physiatrist.’ I had no idea what that was,” Aslam says. “She told me it was another word for a physical medicine and rehabilitation physician, like Dr. [Brock] Bowman and Dr. [John] Lin [at Shepherd Center]. I realized, ‘Oh, my doctors are physiatrists!’”

After several months of inpatient rehabilitation, Aslam left Shepherd Center with a new career to consider.

And finally it was August again.

He began medical school Aug. 9, 2010, as part of the first class at the Augusta University/University of Georgia Medical Partnership campus in Athens.

Medical school is difficult for most, but it was particularly tough for Aslam, who was living independently for the first time since his accident and still dealing with symptoms.

He felt like he couldn’t talk as loud, for instance, fearing that he would run out of breath, a lingering symptom of his punctured lungs. The fear and a lack of self confidence left him quiet in class more than he’d like.

“The faculty were great, and they tried to make things as accommodating as possible – it was a learning process for all of us,” he says. 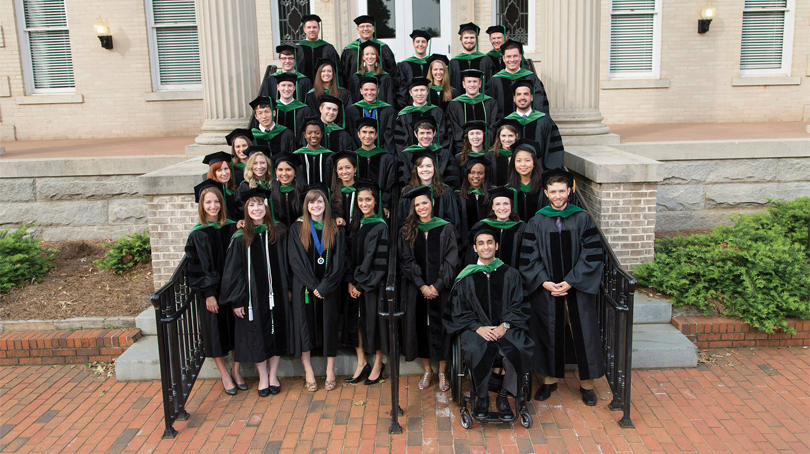 He met his future wife, Zainab Alwan, through mutual friends during his third year of medical school, when he admits he was having a particularly rough time. The two hit it off and began texting regularly. “She was hilarious. I laughed so much. She always made me smile and brightened my day.”

When he set out on his clinical rotations his third and fourth years – planning many of them in Atlanta to be close to Alwan – he says he explored a lot of options for his career. “Everyone at MCG did a great job of making me feel like I could do whatever I wanted, that I wasn’t restricted.”

When it came time to declare though, he says that for him, there was no other option than what his nurses at Shepherd had recommended years before. In March 2014, he matched for a year of internal medicine residency at AU Health, to be followed by three years of physical medicine and rehabilitation at the University of Alabama at Birmingham.

His first rotation that intern year was on the spinal cord injury unit at the Charlie Norwood VA Medical Center in Augusta, which only further solidified his career choice. He often found himself coming in early or staying past shift just to talk with the patients he shared such a camaraderie with.

“I remember waking up every day so happy, thinking, ‘I get to go to work today!’”

He says that hasn’t changed in four years. He still finds immense joy in helping maximize function and quality of life for his patients, as his physicians once did for him.

“There have been so many patient interactions that have enforced I’m doing the right thing,” he says. “Just the other day, I saw a patient with spina bifida. She has this certain issue going on, and her mother says she’s refused to listen to her, which is only making things worse. I was able to say to her, ‘Look, personally, this is what I would do. I understand it from your perspective.’”

This fall, Aslam arrived at Stanford University to begin a yearlong spinal cord injury fellowship. “I’ve always wanted to be able to help patients like me,” he says. “Working at a place like Shepherd Center one day is definitely the dream.”

At press time, he was interviewing and looking for his first job as a physiatrist. He says he is keeping his options open for opportunities in academic medical centers and private practices, but is leaning toward academic medicine.

“Being able to do research would, for me, be another way to have a lasting impact on patients in the future,” he says. “I hope that through research there will come a day when people who’ve suffered spinal cord injuries like me aren’t confined to a wheelchair, that they won’t have to go through the things I’ve gone through. Until that day, I’m dedicated to doing everything I can to help them make the best of what they have now and to make their lives better in some way.” 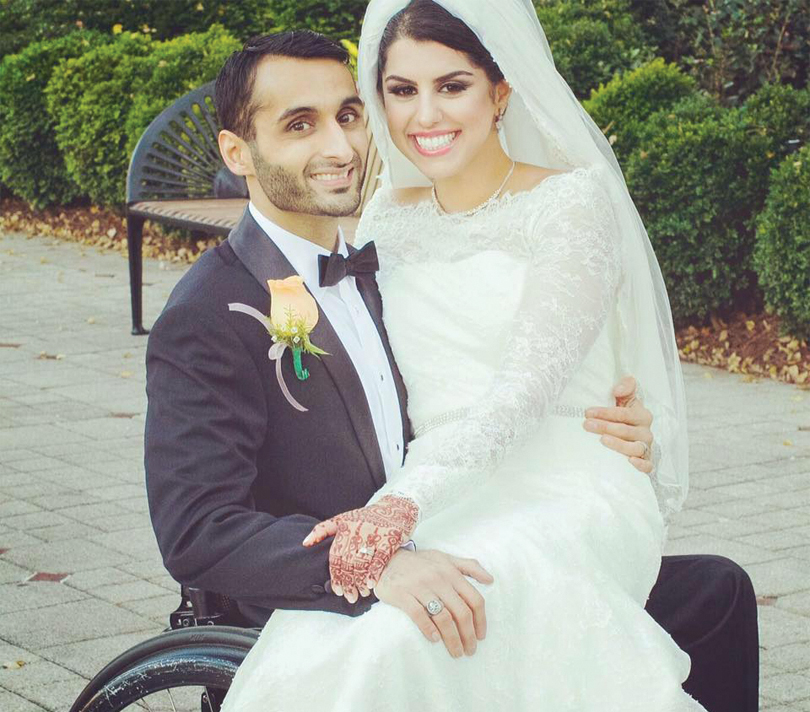 From his blog, Thoughts on Wheels:

“There are so many things I will never experience…

I will never be able to ride a roller coaster again or know what it’s like to hold my wife’s hand while we stand barefoot in the sand on a beach…But there are other things, Each day is a beautiful day. Things are not taken for granted. Anger and other negative feelings are not an issue. Quality. Not quantity. This accident eight years ago is the best thing that could have happened to me.”