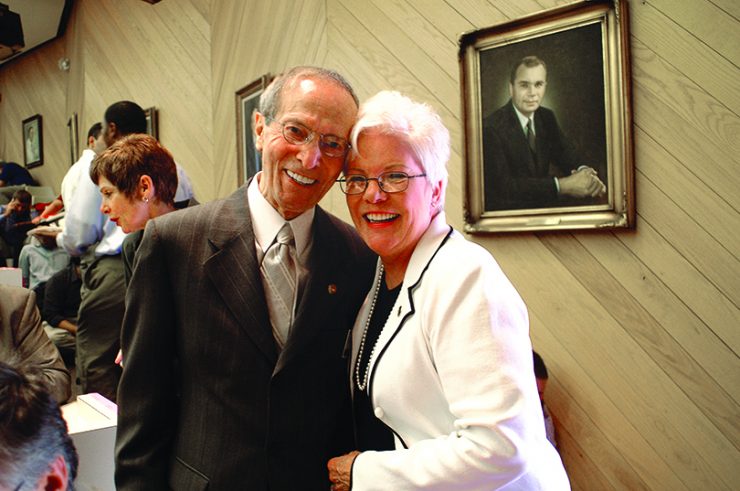 A Heart for Dentistry

He still remembers the 80-hour work weeks he logged after high school to save money for college.

Dr. Emile Fisher’s parents, who had immigrated to the United States from Lebanon, had scant education but high hopes that their four children would thrive in their adopted homeland. But the Great Depression hit them hard, and they struggled to make ends meet.

“I studied business in high school, but we were so poor, I had no hope of going to college,” says Fisher. 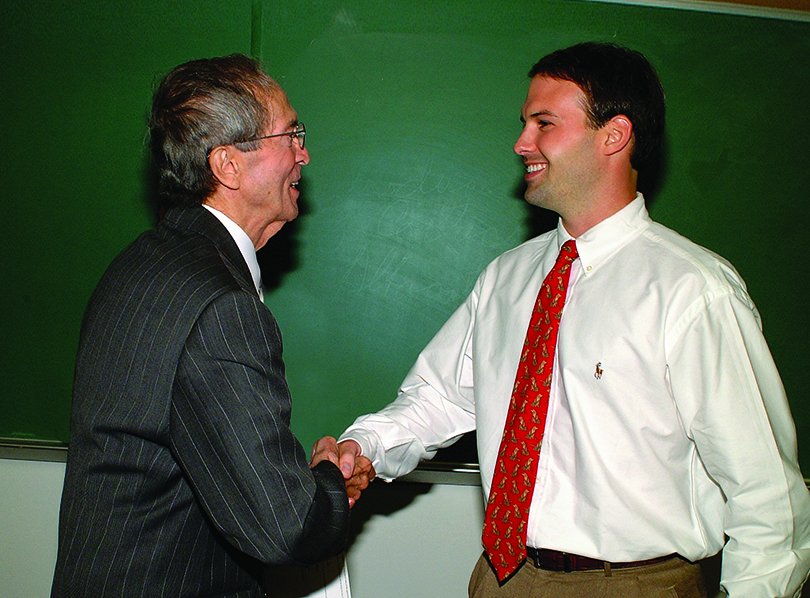 After graduation, Fisher got a job at a shipyard in his home town of Wilmington, North Carolina. By this point, the country was embroiled in World War II, so the work was plentiful. Fisher logged grueling work weeks, earning two dollars an hour. “I worked like a Trojan for six years, and my mother saved every check I earned from the shipyard,” he says.

At last, his dream of higher education was within reach. Fisher enrolled in Wake Forest University, then the Emory University School of Dentistry.

“[My career choice] was a very simple decision,” Fisher says. “I wanted to help others. I felt if I could help others, I was helping myself.”

After earning his dental degree, he wanted to specialize in periodontics but had no money for further training. But the Emory dean arranged for a residency at Northwestern University School of Dentistry in Chicago, with Fisher working evenings to pay expenses. He then returned to Atlanta to start a career, also serving on the clinical faculties of Emory and the Medical College of Georgia School of Dentistry (now The Dental College of Georgia).

“My career was everything,” says Fisher, now 95. Staying single all his life, he devoted all of his energy to his patients — both those in his clinic and those for whom he volunteered.

For more than 60 years, he provided dental services to the indigent at Atlanta’s Ben Massell Dental Clinic. The clinic, a partner of the Georgia Department of Public Health’s Georgia Volunteer Health Care Program, enlists some 150 volunteer dentists to treat those who otherwise would lack access to dental care.

According to its website, “we provide so very many people with basic care for their mouths and for their overall health. We restore smiles and we literally save lives.”

For decades, Fisher was among the clinic’s most enthusiastic volunteers. “I treated a lot of patients who ended up becoming productive individuals,” he says. “That was my mission in life: to treat people in need.” 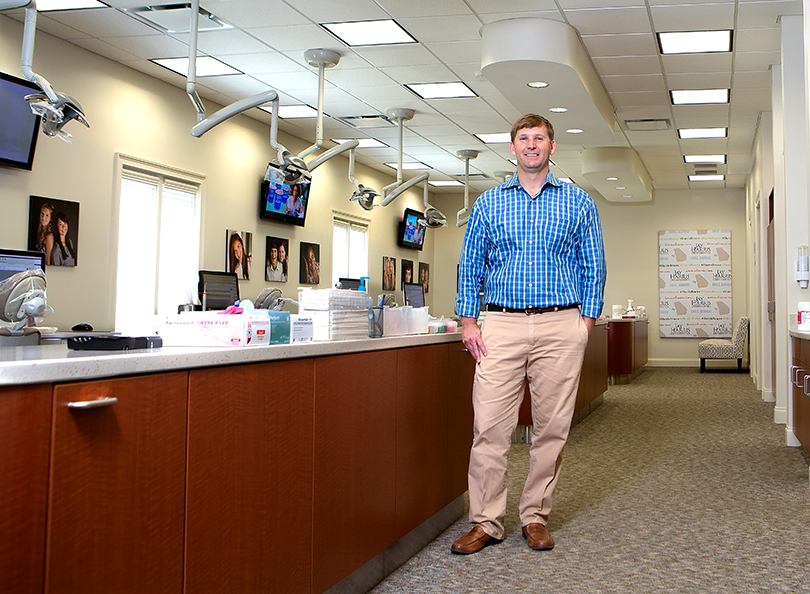 His altruism didn’t stop there. He epitomized philanthropy, generosity and dedication to dental education throughout his life. The impact was so deep and lasting that in 2005, the Georgia Dental Education Foundation was renamed in his honor. The Georgia Dental Association House of Delegates provided initial funding of $50,000. Since then, the Dr. Emile T. Fisher Foundation for Dental Education in Georgia Inc. has enhanced dental services and access to care through quality educational opportunities while funding awards, scholarships and grants to ensure a continuous flow of qualified candidates entering the dental profession.

Scholarship funds are awarded to dental schools, which select the recipients. The biggest beneficiary? The Dental College of Georgia.

“When I think of philanthropy for The Dental College of Georgia, the first name that comes to mind is Dr. Emile Fisher,” says Associate Dean Emeritus Carole Hanes. “When I came to what was then the Medical College of Georgia School of Dentistry 32 years ago, Dr. Fisher had already been providing scholarships for dental students for 20 years. He’s still providing scholarships for DCG students. There will never be words to express the gratitude we feel for his ongoing contributions to the success of DCG students.” 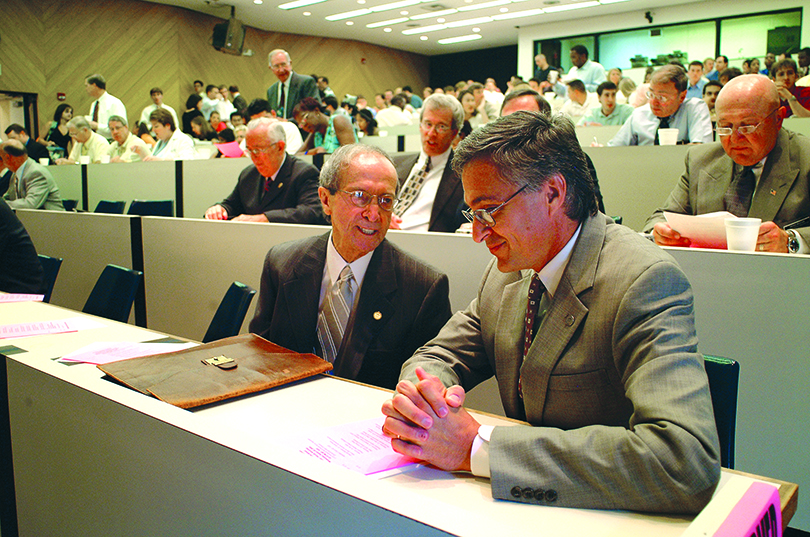 One of those recipients was Dr. Jay Harris (’02), who now practices orthodontics in Columbus, Georgia. “It was such a nice surprise to receive the Fisher Scholarship when I was in school,” Harris says. “It’s the longest-running DCG scholarship, and it has helped so many students. If debt overtakes you in dental school, you’ll lack options when you graduate, because money will dictate your next steps. Scholarships like Dr. Fisher’s help relieve that pressure and broaden your opportunities.”

Harris was so inspired by Fisher that he has followed in his footsteps. His many contributions to dentistry, in addition to his own financial contributions, have included serving as president of the Georgia Western District Dental Society and of the Fisher Foundation. “I have a desire to give back,” Harris says. “It’s enjoyable to know we’re helping students, and I try to attend DCG’s scholarship ceremony as often as I can.”

One of his favorite tasks as a Fisher board member, he says, has been the ability to help select recipients of the scholarship. “Just reading the essays of applicants is so inspirational,” Harris says.

“They’re always so excellent. When I read them, I’m looking for a genuine commitment to service, and that commitment is always evident in the applicants. They’re willing to go above and beyond, do a little more.”

That, Fisher says, is the essence of his fierce devotion to the DCG. “The Dental College of Georgia is where students find their future,” he says. “I want the students to go out and treat people through knowledge, and knowledge comes through education.”

His example has touched those outside of dentistry as well. Since 1962, for instance, he has been an active member of the Cathedral of St. Philip in Atlanta, where he is known as “the hugging usher.” Says Fisher, “I hug strangers, members, older people and younger folks. Jesus calls children to gather around him, and there’s nothing closer to God than the human touch.”

Says Hanes, “Over these last 30 years, it has been my good fortune to develop a true friendship with Dr. Fisher. He is a gracious and benevolent man with a sincere heart for dentistry, dental education and dental students.”

A plaque in the front lobby of the DCG attests to his many contributions to the college.

Fisher appreciates the acclaim, but insists that his contributions are the least he could do.

A Small Price to Pay