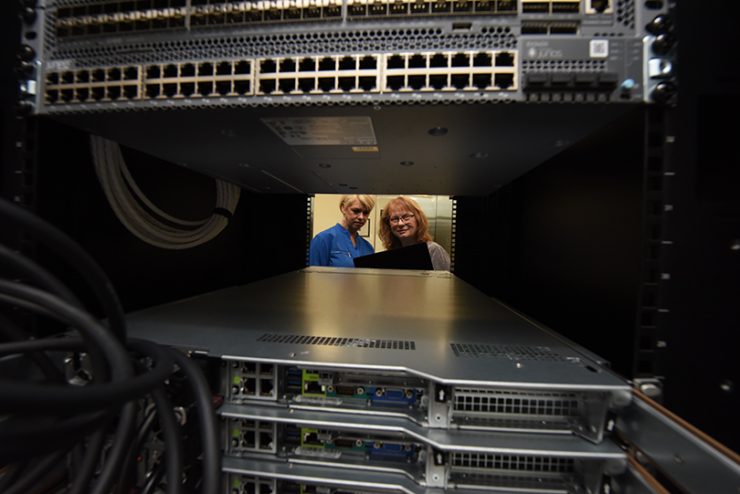 On the Range: Creating the Playing Field

One of the most distinctive elements of the Georgia Cyber Center — something that has captured the public’s imagination since former Gov. Nathan Deal first announced his intention to invest what would eventually become $100 million to build a state-of-the-art cyber facility on the banks of the Savannah River in Augusta — is the cyber range.

Oddly enough, the cyber range also happens to be one of the most misunderstood elements of the Cyber Center.

“The first thing everyone says when they come here is, ‘Where’s the cyber range,’” laughs Todd Gay, the Cyber Center’s outreach and engagement director. “But it’s not a place. At least not the way people envision it.”

Physically occupying space behind a glass wall outside the elevator bank on the third floor of the Hull McKnight building, the first of two buildings making up the Georgia Cyber Center, the cyber range provides a virtual environment to test a wide range of cyber-related applications.

“When you’re in the military, you go to the range to learn your weapon and hone your skills on how to precisely and accurately fire it,” says Nicole Cliff, cybersecurity program manager at the Cyber Workforce Academy. “With the cyber range, that’s just what we’re doing. We’re offering a safe, sandboxed environment that allows you to specialize and train without worrying about breaking your live network. Everything is contained.”

According to Cliff, all the user needs to do is log in. No complicated downloads or restrictive hardware requirements.

How? With power. Lots of power: 1,920 central processing unit cores, 15 terabytes of RAM and two petabytes of storage.

And because it’s built with the same open- source software that is being leveraged by the Army at the cyber range at Fort Gordon, the range will have the versatility to operate any different flavor of software, an important advantage given the wide range of user needs.

Not only can the cyber range be used for cybersecurity training, it can be used for educational purposes as well — both academically as well as in an employee training environment.

“While we can build specific attack and defend spectrums for people who are working in those environments, it can also be used to test the skills and awareness of everyday employees,” Cliff says. “It can accommodate any real-world computer training you want. You basically just tell us what you want or what you need, and we can have that deployed for you so you can just log in to the environment.”

According to Cliff, state agencies have been lining up to schedule time on the range.

“Cyber ranges now are a dime a dozen, but most often they’re very expensive,” she says. “We are able to offer that service as a resource to the state at less cost than what private industry would offer, which was the original vision from the governor.”

Advice Over Time: Tech Time and the Growing of the Internet of Things