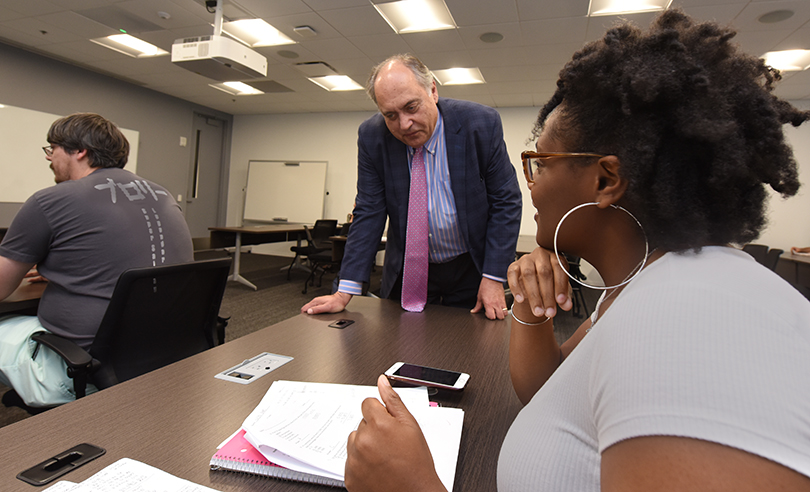 When you’re interviewing to be a university dean, especially a computer and cyber sciences dean at a place Fortune has identified as one of the contenders to be the world’s cybersecurity capital, everyone expects you to be bold.

It just comes with the territory. Bold ideas. Bold vision.

So when Dr. Alex Schwarzmann laid out his plan for what it would take to catapult Augusta University’s new School of Computer and Cyber Sciences to the upper ranks of similar schools and colleges — a plan that literally bristled with boldness — he knew his audience would be tough to fluster. But he never expected them to agree. Not right out of the gate.

“They’re telling me they want the school to be a national caliber college, and I told them to attempt that, we needed to balance teaching and research,” he says. “And I said it would take at least 30 new faculty to get there.”

It’s that last bit — 30 new faculty positions over a three-year period — that he expected to cause some heartburn, because it’s just not something that happens. Anywhere.

“This is uncharted territory,” Schwarzmann says. “I don’t know any other university, currently or in history, that would say, ‘Go out and fill 30 positions.’ I don’t even know a school that has double digits in one year, so it’s really a rare thing.”

But instead of winces, he saw nodding heads.

“I was surprised,” he says. “I thought they would try to negotiate me down, but they didn’t, and I’m here because I believe we can achieve what we’re setting out to do.”

“The university was committed to making a large, strategic investment in the school’s creation, and it was clear Alex was the visionary leader to bring that shared vision to reality,” Caughman says.

“He is that rare combination of internationally renowned computer scientist, experienced academician and visionary leader, and it was quickly obvious that he shared our aggressive vision for building a world-class school that could capitalize on Augusta University’s emerging strengths in computer and cyber sciences and attract top talent from around the world to join us.”

Schwarzmann didn’t just appreciate the receptiveness he received from leadership; he appreciated the vision they already had for the school, which he felt was far different from any of the larger, more established schools. Because once he decided to check out Augusta, he decided to investigate other opportunities as well.

“I said to myself, ‘As long as I’m looking at this opportunity, let me look around,’ and what I saw at a few places nationally was a sense of stagnation,” he says. “They were prestigious but difficult to steer and had very little direction. I felt it would be like inheriting the Titanic.”

So when he looked at Augusta again, he was even more impressed by the opportunity and the support.

“I talked to the president, the provost, the deans and the faculty, and everyone has a consistent message — Augusta University is going places — and I said I can’t pass that up.”

Though Schwarzmann says size matters if you want to be a leading institution, it’s what that size means that really counts. In other words, it’s not just about occupying space, it’s about what that space allows you to do.

Adding faculty at such an ambitious pace not only adds breadth; it helps balance the teaching and research workloads, allowing faculty to dedicate more time to research. Because research, according to Schwarzmann, is the cornerstone of any great university’s computer science program.

“Any university that is in the Top 50 or Top 100 is there to a great extent due to its visible research,” he says. “So the faculty I’m hiring right now are able researchers.”

Only the Best
But how, practically speaking, do you go about hiring 30 faculty members in three years?

The way not to do it, Schwarzmann says, is to focus on building up a specialty. Because when you’ve narrowed the field, you get relatively few applicants, and you’ll likely have to settle for mediocrity.

“If you want to be visible and you narrow your scope, it’s a self-fulfilling prophecy for failure,” he says. “So in the first year, my strategy was to hire anybody who was good, regardless of the area.”

For the second year, he says he’ll have to be a little more careful and focus on filling gaps while still hiring quality. Hiring for year three will depend on where he sees the strengths developing.

And because cybersecurity is really a branch of computer science, that growth might not come where conventionally expected.

“Most of the cybersecurity vulnerabilities that bad guys exploit are due to poorly constructed software,” he says. “If you build shoddy software, there will always be holes no matter how you layer the cybersecurity.”

He likens it to the medical world: How could you be a good surgeon if you’re a lousy doctor? One ability necessarily precedes the other.

Before his first year was out, Schwarzmann had hired eight of the 10 faculty members he’d planned on hiring for that first year, and the interviews are still going on. Two of the eight faculty are women, which is better than the national average. Schwarzmann hopes that will help recruit more female students who, despite programs like the school’s Girls Who Code camps that work to narrow the gender gap in computer science, aren’t choosing computing as a field the way male students are. When they do, however, they succeed in greater numbers: The last large class Schwarzmann taught had 90 students. While only 20 were female, five of the top 10 were female.

“I think it’s because when girls choose computer science, they know what they’re doing,” he says. “They’re choosing it because they have a passion for math, for computing, modeling or abstraction.

But when a male chooses computer science, many times it’s simply because it’s accepted or expected or just the thing to do.”

Regardless of gender, he says, when students choose something that’s right for them, they succeed.

High Demand
According to Schwarzmann, the school’s 2019 incoming freshman class is projected to increase by more than 20 percent, and because of the school’s growing visibility, the quality of these students is continuing to increase.

“When it comes to choosing a school, good, motivated students do their homework” he says. “They look at what’s going on in Augusta.”

And nowhere is what’s going on in Augusta more obviously centralized than at the Georgia Cyber Center, the two-building, $100 million center built by former Gov. Nathan Deal that serves as home for Augusta University’s School of Computer and Cyber Sciences. There, Augusta University students rub shoulders with industry leaders in cybersecurity and innovation as well as those working for state agencies and the military. And while the industry’s exceptionally high employment rate for graduates with a bachelor’s degree makes the internship opportunities a little less urgent than those in other fields, the experience and the connections are certainly valuable to those on both sides of the equation.

Perhaps even more valuable, though, are the other partnerships.

According to Schwarzmann, 15 or 20 years ago, most interesting research problems were originating at universities, while industry could buy off-the-shelf solutions for their computing problems.

Now the problems encountered by the industry are so complex and sophisticated that it actually brings industry and academia closer together: Computer scientists reach out to industries and say,

“Do you have any cool problems we could work on with you?” And industry embraces collaboration because no off-the-shelf solutions exist. And because of the type of tenants at the center and even the design of the building itself — lots of open spaces and areas of forced collaboration — that kind of outreach happens naturally.

And given the growth expected for the overall area — particularly with Fort Gordon, the National Security Agency, the U.S. Army Cyber Command, and the Savannah River National Lab — having an established nexus for so much of the cyber activity is beneficial.

In May 2019, CSO Online, a global provider of news, analysis and research on security and risk management, listed Augusta as one of the Top 10 Global Cybersecurity Hubs of 2019.

Research is the Key
Not only do research partnerships bring opportunities and institutional exposure, adding researchers to the faculty will significantly grow the program. Adding 30 researchers, with each attracting three or four graduate students as is the custom, very quickly adds nearly 100 graduate students to the school, with the hope that most of them will come from the undergraduate programs in regional and national universities. This can go a long way toward addressing what Schwarzmann says is a growing national crisis: the shortage of doctoral students who are domestically educated.

Ironically, Schwarzmann says, the shortage is a result of the nearly 100 percent employment rate. Companies are snatching up anyone with an applicable bachelor’s degree by offering them a very simple choice: more tuition or a $100,000 starting salary. Because so many domestically educated students go for the job and the money, the national percentage of doctoral students who are international students is very high.

While there’s nothing inherently wrong with that, Schwarzmann says it creates a proficiency vacuum for the nation, because once educated, many of those very talented researchers are returning to their countries of origin, taking all that knowledge with them.

Work has begun on establishing a doctoral program, which Schwarzmann hopes to have in place in 18 months — yet another aggressive timeline he says is important for the strength of the program.

“We have to set goals that are ambitious, otherwise we’ll be sentenced to time served,” he says.

Currently, the Master of Science and Information Security Management degree, a course-based degree, has around 50 students, and in the spring of 2020, the first incoming class for the Master of Science in Computer Science degree will begin, which includes a research thesis. It’s a national standard curriculum that Schwarzmann says is expected at any research university.

“Every time you propose a new program, people are asking if you’re duplicating something,” he says. “In this case, my answer is yes, absolutely. We’re duplicating what can be found at any university that is good in computer science, from MIT in the East to Stanford in the West, because it’s a standard program that any university should have.”

All of this is positioning the School of Computer and Cyber Sciences as the bold destination school Schwarzmann sold to university leadership.

“We are excited by the growth the School of Computer and Cyber Sciences has already experienced and remain committed to continuing on our journey toward becoming one of the marquee computer science schools in the nation,” says Augusta University President Brooks Keel.

That consistent backing continues to be a motivation.

“The fact that the university has this wonderful vision is not easy to find if you look at the national landscape,” Schwarzmann says.