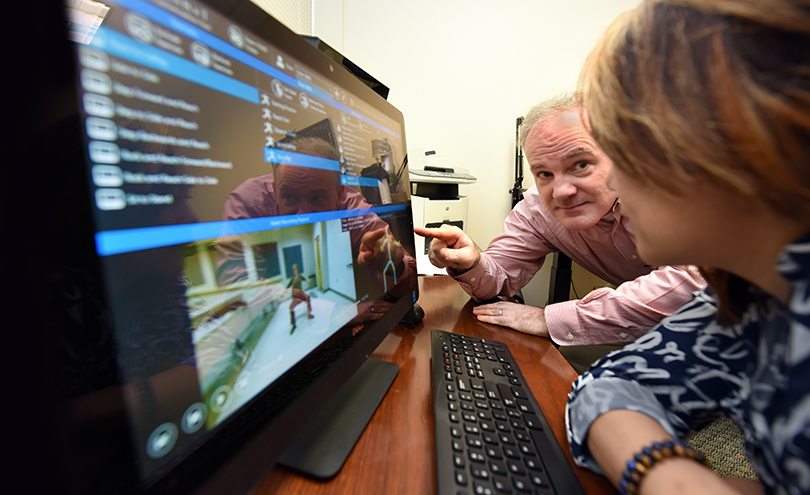 The two guys in question were Dr. Paul York, now an assistant professor in Augusta University’s School of Computer and Cyber Sciences, and Dr. Bill Hamilton, currently assistant dean in the College of Nursing. Back then, however, the two were part of the Hull College of Business (as was the university’s computer science program), and what they were talking about was their desire to find an interdisciplinary research project. After bringing in Dr. Charlotte Chatto from the physical therapy program, Dr. John Morgan in neurology and Dr. Cathy Slade from the business school, they had their idea: a home-based telerehabilitation system that used the Microsoft Kinect, a motion capture tool that was part of the Xbox gaming system, to bring an automated, autonomous feedback system into the homes of patients with Parkinson’s disease.

The problem they were addressing is a common one for Parkinson’s patients, who are often sent home to continue self-guided physical therapy regimens without knowledgeable caregivers able to evaluate their performance.

Enter the home-based, Kinect-driven system developed by York and his team, which basically gives patients a video of movements to duplicate and then uses the Kinect’s motion capture capabilities to evaluate how well they are doing it.

Essentially two cameras and a projector, the Kinect measures the relative size of the dots it projects onto the body to know how far away each one is, which therefore provides a real- time map of body positioning. After recording how accurately the patient is performing the task, the system then sends data back to the physical therapist so the patient’s ability to replicate the motions can be tracked.

“The goal is that eventually maybe the physical therapist is charging a monthly fee to do the remote monitoring — but one less than what it would cost to go out and interact with them — and if they see anything that alarms them, they bring the patient in for an appointment,” York says. “It’s home-based health care for physical therapy.”

Trialed to largely positive results, the project was put in jeopardy when Microsoft discontinued the Kinect system for gaming purposes. However, now that the system has been reinstated for non-gaming uses, York and his team are anxious to pick up where they left off, adding to the 1,000 hours of development they’ve already put in.

“Research like this just fits into what we do here,” York says. “There’s a purpose outside of just cyber that this college is able to serve, and it fits really well with the medical mission of the university as well.”