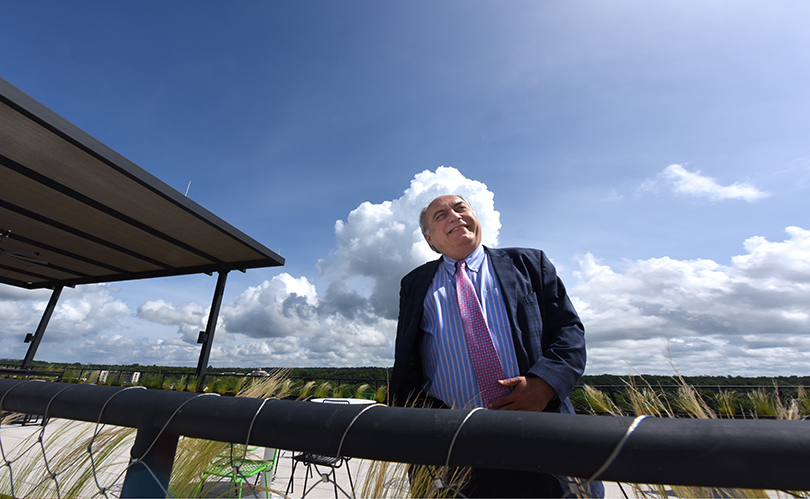 The first time people thought Dr. Alex Schwarzmann, dean of Augusta University’s School of Computer and Cyber Sciences, might be crazy was early in his career when he left a lucrative job in the private sector to become a low-earning postdoctoral student. Ok, so maybe the opportunity was at MIT, and sure, the researcher he was working for was very influential, but still — turning your back on the business side of computer science to pursue research? At a post-doc’s wages?

You bet they thought he was crazy.

Crazy or not, that’s what he did, and two years later when he finished his studies, he took a job at the University of Connecticut, where he rose to be the head of computer science and engineering.

Then, in what seemed like the blink of an eye, somebody was giving him a certificate thanking him for 20 years of service.

Wait a minute, he thought. Twenty years? That’s a lifetime.

Cut to the second time people thought he might be crazy: last year, when he said he was considering a job at Augusta University.

“For the people up north, they thought one of two things: Either I’m crazy, or there’s really something wonderful going on down here,” he says. “Now, it’s my job to tell them it’s the latter.”

(For a more in-depth look at what’s going on, check out “Thirty in Three” on page 18, but for now, here’s all you really need to know: The school — not the university, the school — is adding 30 faculty members over three years. The only thing crazy about that is the opportunity).

Always interested in math — “It’s probably the only subject that has absolutely no politics associated with it” — Schwarzmann started out at Stevens Institute of Technology, got his master’s at Cornell, spent two years at Bell Labs and then moved to Digital Equipment Corp., where as a software engineering manager the company paid for his doctorate at Brown.

While he eventually moved into administration, that grounding established a love of research that’s evident in the more than 150 research papers he’s authored and the visibility he’s achieved by chairing the program committees of all the top international conferences on the theory of distributed computing. However, even with the unprecedented opportunity tied to the growth at Augusta University, the move to Georgia wasn’t without its concerns. His previous organization had four times as many faculty members and twice the number of students. On paper at least, that looks like a step backward.

“Because we’re starting small, every single faculty member weighs more,” he says. “We’re a young, old university with the vision of becoming a comprehensive research and education university and a leader in computer science and cyber research. I couldn’t pass that up.”

Like
Like Love Haha Wow Sad Angry
Alex Scwarzmann Latest School of Computer and Cyber Sciences View From the Cloud
Share your story
Our best stories often come from suggestions from the campus community.
Submit News